TV News: Next on Young Montalbano 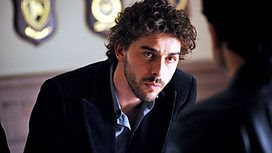 Young Montalbano which started last Saturday appears to have been well received [I am of course still on the classic series of Inspector Montalbano and cannot comment yet!]. The second part of the six-episode run is New Year's Eve, and is on Saturday 14 September at 9pm on BBC Four.

A man is shot dead in his hotel room on New Year's Eve, so Montalbano spends his first New Year's Day in Vigata investigating a murder. The case presents several unusual conundrums, not least the fact that the victim was co-owner of the hotel.

The series is co-written by Andrea Camilleri and Francesco Bruni with the stories drawn from several short story collections.
Posted by Karen (Euro Crime) at 1:45 pm