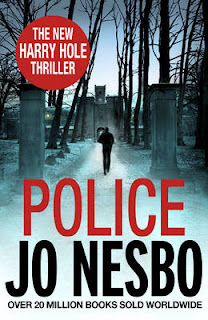 The friends of Harry have been brought together by Harry's old police boss Gunnar Hagen to form an unofficial small task-force to solve the latest serial killing spree. The victims are police officers and they are being killed at the scenes of unsolved murders, ones where they themselves were part of the investigation team. The team comprises Katrine Bratt, on loan from Bergen, Beate Lonn and her sidekick Bjorn from Forensics and psychologist Stale Aune and they are working out of the familiar, over-heated room in the basement.

As well as the murder plot there are also several plotlines carried over from PHANTOM including the rise and rise of Police Chief Mikael Bellman and the decline of his enforcer/friend Truls. There is also the matter of the tall coma victim kept under armed guard who seems to be waking up.

Indeed there are so many plotlines that it's impossible to cover them all but the tension is relentless; from the first hundred and forty pages where you want to say “just tell me what happened to him”, to the terrifying murder scenes and the overlapping narratives – where the story cuts away at critical moments to another character, delaying the resolution. In Harry Hole, Jo Nesbo has created one of crime fiction's most charismatic heroes and this is reinforced by his absence from the investigation team. Fans of Harry Hole and Jo Nesbo will enjoy POLICE and be thoroughly absorbed in this typically well-plotted, complicated story with its many misdirections and dead ends. There is a lot going on and not all is neatly tied up at the end.


After the grimness of PHANTOM and the extreme violence of THE LEOPARD, POLICE is more akin to the earlier novels in the series, emotionally similar to THE REDBREAST, and as always, I can't wait for the next one.
Posted by Karen (Euro Crime) at 9:00 am

Karen - An excellent review, and it's good to hear that this one continues the series in such an interesting way.

A return to REDBREAST style suits me very well indeed.