Review: The Gift of Darkness by V M Giambanco 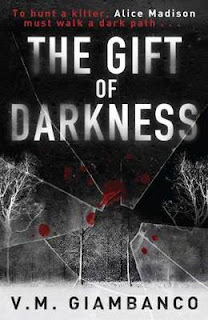 "...This here is the father. James Sinclair – late thirties, she thinks. That's the wife, Anne. Same age. These are their kids, John and David, nine and seven years old. Someone took out the whole family".

Seattle, Washington, two weeks before Christmas.
Homicide Squad Detective Alice Madison is on a cold night-time stake-out with her partner, Sergeant Brown. Two more detectives are in a car at the other end of the street. The team waits on the slim chance of catching the killer of a local student. At 4.15 in the morning they pack up and decide to rendezvous at a 24-hour convenience store a couple of blocks away. Leaning against their car outside the store, Madison notices a young girl, dressed too lightly for a December night and holding something under her jacket. She follows the girl into the store. The girl's attempt to steal candy bars at gun point fails and they take her back to precinct headquarters. She is thirteen years old so they call in social services. Meanwhile Madison talks to her, telling her about her own first visit to a police station when she was twelve and had run away from home...
"Bullshit" says the girl. But it isn't.

At six in the morning Madison clears her desk and heads home, stopping for a beach run on the way. Back home Madison sleeps but she dreams that same old terrifying dream. On Monday morning, at the office of law firm Quinn, Locke and Associates, Quinn opens a cream envelope. It contains a card with two words printed on it: "Thirteen Days". A couple of hours later there are blue-and-whites drawn up outside a house on Blueridge. A press helicopter hovers overhead as Brown and Madison get out of their car. Brown shows his badge to the officer on the door.
"It's pretty bad." says the young cop.
And it is. The father, mother, their two young children – all dead. Blindfolded and marked with a blood-drawn cross on their foreheads. Carved on the bedroom door-frame are two words: "Thirteen Days"....

Italian-born Valentina Giambanco lives in England and works in the film industry. With THE GIFT OF DARKNESS she has made a convincing and gripping début on the crime thriller scene. Her lead character, detective Alice Madison, is new to the Seattle Homicide Squad and comes with baggage – those nightmares for a start. Giambanco has fleshed out her characters well and already there is a bond developing between Madison and her reticent partner, Brown. For sure you know that both characters have back stories. With a setting that embraces both the city of Seattle and its surrounding ancient forests, the story is well embedded in place and atmosphere. And the atmosphere is one with a dark edge. The plot takes a while to pull together. There are quite a lot of characters to establish and the story refers both to a past crime – the abduction of the "Hoh River boys" – and to the present day murders of a lawyer and his family. It is not long before the police have a prime suspect. But as the story develops so does the darkness and the suspense, notched up by the repeated refrain of "Thirteen Days". With sharp, intriguing plotting (Giambanco credits her work in film editing for a grasp of plot construction and storytelling) the book takes a closer look at the nature of evil, with a sideways squint at survivor guilt and revenge. Just what you need in what is already quite a thriller.

THE GIFT OF DARKNESS is an impressive début, absolutely recommended for a good read, and if this is the start of a new crime series, which I hope it is, I am ready to read more about Madison and Brown of the Seattle Homicide Division.