Review: Sacrifice by Will Jordan 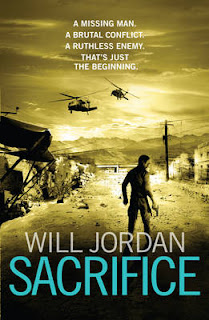 SACRIFICE is the second novel by Will Jordan, and also the second in his Ryan Drake series. Jordan's original plan was to become an actor and his casting as a soldier in a film about World War II led him to doing extensive research about weapons and military history. His depth of knowledge is very evident in his books and this, along with his gripping plots and likeable characters, makes him the first rate author that he is.

In this instalment, Drake, a British CIA agent, and his shepherd team are sent to Afghanistan, in search of a senior CIA operative who has been shot down and taken hostage by insurgents. Their search takes Drake to places and situations where he is clearly not wanted and it is not long before snipers are taking pot shots at him as well. His skill in the field keeps him alive and ahead of the game but, when he is betrayed and set up by someone he thought he could trust, Drake finds himself on the run from the 'good guys' as well. As if that isn't bad enough, lurking in the shadows is a mysterious woman, with her own scores to settle, and it isn’t long before their paths cross and Drake’s past catches up with him.

Will Jordan writes in a way that catches your attention right from the start. You are grabbed by the eyeballs and taken on a whirlwind journey through the pages of his book, then dumped, exhausted, at the other side. I love the way he sucks you into the story. You become involved in it and are there with him, crouching behind a tree to remain hidden from the terrorists, or wincing with pain from a gunshot wound to your side.

I am delighted that there is more to come with Ryan Drake. He is an interesting, no-nonsense character and I am looking forward to getting to know him better!