Review: In the Darkness by Karin Fossum 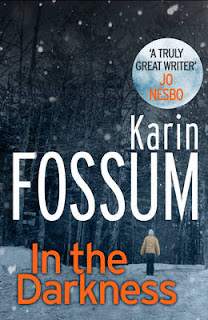 
Published in 1995 in its original Norwegian, IN THE DARKNESS, the first Inspector Sejer novel has finally made into English. Despite its relative age the story doesn't feel that dated except for the obvious lack of mobile phones. Fossum's stories have a timeless quality about them dealing as they do with human nature which doesn't seem to change.
The first chapter has an unknown, bedraggled and injured woman coming into the police station with Sejer. The story then jumps back a week or so and we meet Eva and her daughter Emma who, when walking by the canal discover a dead man floating in it. Eva's behaviour is odd. She goes into a phone-box but rather than call the police she rings her dad but pretends to Emma she has called the authorities and that they don't need to wait.
Sejer and his small team, including Skarre (who is his sidekick in the later books), begin an investigation into the dead man who is soon identified as Egil a missing man from four months ago, a brewery worker who had gone out to sell his car to a mysterious buyer. Sejer also has the unsolved murder of Maja a prostitute who lived close to where Egil socialised at night and died a few days before he went missing. Are these two deaths connected?
Eva was Maja's best friend and was questioned at the time of her friend's death and now finds herself being requestioned by the implacable Sejer. Eva is in a terrible mental state as someone is after her and when that someone catches up with her she finally gets to tell of the events that have gone on in the last four months.
As the first book in the series, Konrad Sejer is introduced in more detail than he is in the later books: his physical description, his clothes, his family situation, his dog and he even does some skydiving (which is mentioned in one of the later books). However he isn't in it as much as you'd think from the opening chapters. He has a team (and a boss) rather than it being him and Skarre however much of the book belongs to Eva. The original title is Eva's Eye and it's her story we hear, though Sejer appears regularly in it.
The moral behind IN THE DARKNESS could be that “money is the root of all evil” as it is money that drives the actions of those who are killed and it's money that makes Eva's life so complicated. It also shows how a once law-biding person can be tempted to do illegal acts with reasonable justification. This is a well-plotted novel with plenty of surprises. It's also a melancholy tale as many people's lives are ruined or lost.
Interestingly it also contains the seeds for the next book, as the team are notified about the disappearance of the six-year-old girl Ragnhild, which opens the Glass Key award-winning DON'T LOOK BACK.
Posted by Karen (Euro Crime) at 10:20 am

Karen - An excellent review! I'm excited that I will finally get to read this first Konrad Sejer novel :-).

Yes, a very good review. I'm looking forward to reading this: as you write, there was more detail about Sejer in the earlier books than in the later ones.

Karen, Thank you for such a thoughtful review. I originally heard of Karin Fossum on this website and I am excited to learn about this original book. I had wondered what and where it was. I hope I can find it in the US.