My next panel was on Saturday morning about The (A?) Golden Age.

For many, the Golden Age of British crime fiction was the 1920s and 1930s, when writers such as Christie, Allingham, and Sayers were at their peaks. Others would argue that we are currently living through crime fiction’s true Golden Age and that contemporary writers are more than a match for the Golden Oldies. Banging the drum for the here and now are Stuart Neville and Robert Wilson, while Nicola Upson and David Roberts will be talking up the cosies. Chairman, Martyn Waites (aka Tania Carver) will do his best not to take sides.

DR hates that word cosy - demeaning and patronising. TGA started 1920 and died out in 1950s; there were some superb novelists eg Dorothy L Sayers, who despised own books; Agatha Christie was a good writer, Tey, Nicholas Blake - that's what makes it GA - very good writers and better than a lot today (ooh! -  controversy)

RW said after WW1, needing to set the world to rights. He reminded self of GA by reading Strong Poison (DLS); ruling classes wiped out the working class by bad decisions, but business as usual in novels. DR disagreed - upper classes suffered great losses too, first over the top life expectancy of two weeks for young officers. Rules about good and evil, which are not so clear in modern novels as "evil" is explained by social reasons. RW said that by the end of WW2 knew what is evil is : Hitler.

NU: direct correlation between WW! and GA but not due to class. Books show the importance of an individual life -  one life can matter against mass slaughter of war.

MW:  Christie villains often a foreigner or a member of working class. But DR said don't forget Poirot ia foreign refugee and that Miss Marple is part of a despised generation and a spinster. Upper classes can ask questions and and travel so as not restricted to a couple of villages like Midsommer Murders - so convenient  to have aristocratic sleuth, not just snobbery.

DR said there was too much violence in RWs books. The constant use of violence is like a drug, keeps needing to be increased.

MW said have moral responsibility to put violence in book as dealing with a violent death.

NU:  Tey made a distinction between legal and moral justice.

DR:  Harret Vane (in DLS) almost died,  not because of murder but because of not being married to the person she was living with.

MW: when read GA didn't recognise the England in it as he grew up in Newcastle.

Is it yearning for an England that didn't exist?

SN - all crime fiction is escapism. Amplified compared to real life and you get justice - also rare in real life.
RW - Scandinavian crime fiction popular as seen as ideal countries, now no-one want to go there!

MW - original titles of TGWTDT - Men who Hate Women - could be a title for any noir novel.

NU - Not all GA set in village eg Tiger in the Smoke by Allingham is set in London. Read Tey to see what it's like for women between the wars.

DR - why would you reread once you know the killer but AC still read in France, USA. How many books written today would people go back to? No cohesive school.

SN - there are movements rather than individual novels: tartan noir, Irish, Scandinavian.

MW - nice if bit sooner didn't have to wait 50 years to be feted.

AC is fondly remembered as bridge gap between child and adult reading.

MW suggests that cosy has mutated into forensic novel? eg Patricia Cornwell doesn't look at psychology behind it, less cake and more blood.

DR would put P D James into GA. He hates violence and serial killers in modern stuff. Detective who is alcoholic, chip on shoulder and close family is investigated and they go and investigate - "word for it, self-indulgent comes to mind".

MW mentions Knox's The Decalogue, the ten rules for crime fiction reads out many of them eg must not include a Chinaman.

DR asks do you identify with killer? SN says evil doesn't know its own reflection. In their mind are doing the right thing. NU loves to write murder's pov as well. People like you and me not evil. Doesn't see self as writing GA novels as writing with modern sensibility re sex, violence set in the past. MW every one is a hero in their own story.

DR greatest proponent of this is Patricia Highsmith with Ripley - a modern GA writer, little violence but MW disagrees. There is violence but not modern torture.

What have we gained/lost from GA?

SN it established a framework. Variety crime fiction can take. (leading onto phrase) transcends the genre - MW "twatish phrase that is!"

NU books we can enjoy, in bucket-loads. People return to Tey

DR more than just taking a sweetie - put aside Henry James and pick up Aggie with a guilty sigh.

Question from the audience:
Why do people keep creating defective humans?

MW - people like to read about damaged people and so feel better about self.

SN - deals with phsical rather than emotional damage in new book.

MW - happy is hard to write about. SN - Brian McGilloway does it well

DR - loves P James books but wishes Grace would "only find his bloody wife" and then he could relax.

MW: any good novel should make you laugh/cry/think.

First GA was female, English writers and second one influenced by Americans.

Chandler and Wodehouse in same class at Dulwich. Imagine Marlowe & Wooster together! 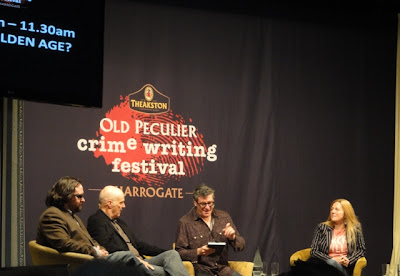 Fascinating, thanks for the write-up. There seems to be no general conclusion that they all agreed on, which is correct, I think!

Chandler and Wodehouse in the same class at Dulwich!
I think the time line is wrong ;-) And I think a Marlowe in Marlowe House might have confused poor Wooster.
In my years at Dulwich [around the same time as Simon Brett] both Wodehouse [because of his wartime broadcasts] and Chandler [because he went to Hollywood and wrote crime fiction] were persona non grata. The respected "Old Alleynians' were explorer Sir Ernest Shackelton, cricketer Trevor Bailey and writers AEW Mason [The Four Feathers] and CS Forester [The Gun]. I think both Mason and Forester wrote crime fiction, but their war stories were the ones we had to read.