Harrogate - Writing for Your Life

I missed the controversial e-book panel to get some sustenance and returned for:

Writing for Your Life: 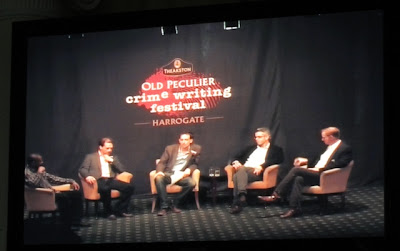 My rather brief notes:

CC applied to work at MI6 but contrary to rumour didn't get in. Thinly disguised Vladimir Putin in The Trinity Six.

CMJ: described as a "loss" when lose a target that's under surveillance. Cannot track someone with just one person unlike in films/books.

BS also writing as Daniel Blake with a series set in the US: New Orleans, Pittsburg.

TT is a true crime writer - has he risked his life - yes and told of when he interviewed a criminal called The Governor; he only wanted a short quote and so took no notes. The Governor rambled on for an hour and then wanted TT to read his words back to him. TT had a few minutes to decipher (his non-existent) shorthand notes and then had to read it three times (in front of burly thugs) before being allowed free.

DH (a lawyer) is involved in the Innocence Project - looking at cases where the person might be innocent. His third book, Innocence is based on the project - a real case where fingerprint faked and whole dept shut down for 3 years,

CMJ would get others people to take risks, didn't do surveillance himself and recommends that you always have a woman on the team as they are less obtrusive.

DH's new book, The Guardian, is a standalone looking at the changing role of women in military, though they can't go into combat there are a lot in military police. he's toying with the idea of bringing her back.