And the final event of the weekend was the interview of Jo Nesbo. The queue was enormous and stretched all through the hotel.

The Harry Hole books in the correct order.

From the programme
Unarguably the star of the current Scandinavian crime scene, Norwegian Jo Nesbo has become one of the best-selling crime writers in the world, with two of his books selling every minute. This success can only increase with the latest Harry Hole thriller, Phantom and Martin Scorcese set to direct a film adaptation of his earlier bestseller The Snowman. There could be no better way to round off this year’s festival than with rock star and crime writing phenomenon Nesbo, in conversation with BBC Radio 4 Front Row’s Mark Lawson.


JN wasn't going to come to Harrogate as in Italy but Mark Billingham forced him. He is able to write in airports, on planes and trains. Often pleased when planes delayed! He can write almost anywhere. Bought an apartment to write in and it is the one place he can't. He just needs coffee and music and he's ok.

He wasn't full of beans when he found out that Jo was thought to be a girl's name, Jo's not man's name.

He then told a story of when he was in Manilla and saw his books on the shelf in a bookshop. He offered to sign them but shop assistant very suspicious and asked for id. When buying some books, she said I'm sorry without your id we cannot give you writers' discount!

Harry Hole name is based on the police officer in the his village where his grandmother lived. He never saw Hole but grandmother would say Hole would get you if you don't go to bed. He met Hole many years later at a funeral and when chap said he was Hole, JN's first thought - but it isn't 8pm yet.

JN's father grew up in NY and called him Jo not Yo.

[discussion about out of order publication of his books in English] - chaos, randomly published (by Random House!)

Gets a number of emails from people saying they won't read them until get them all in order - sales will take off!!

The first book, The Bat (The Batman) is set in Australia. Wasn't a conscious decision and no idea it would get published. Saw friends trying to write literary novels and failing so decided to write something simple as first novel. Used to writing lyrics and short stories and as he was going to Australia for 5 weeks came up with crime story. Arrived jet lagged and went to hotel (where HH also stays!) and started writing. After 5 weeks had first draft of novel finished. He wrote it so quickly he told publishing house it took a year and a half to write.

HH just came out on page. Planned to send it to publishing house and get polite refusal and keep on writing. Didn't plan as a series. Second novel took long time to think how to include Harry as he wasn't a fully developed character until The Redbreast. Then he knew who he was and found sides to his character. The Batman based on aboriginal myth, half man half bat, ancient symbol of the devil.

Used many clichés of hard boiled detective with contradictions in character - single but romantic, inspired by Frank Miller/Sin City which embraced cliches. Wanted to get to who he was.

[Book two] The Cockroaches set in Bangkok was inspired by Ray Bradbury short stories. Inspired to have readers travel to places never been ie not London, NYC.

Didn't sell rights of first two as strange enough to have Norwegian detective let alone one working in Sydney.

Optimism going forward vs pessimism of WW2. When he was 15 he found out his Mum's family worked for resistance and father fought along with Germans. After the war he spent 3 years in jail. How was the wedding?! Incomprehensible that his father wore a German Helmet, the symbol of evil. Became close to father after speaking to him about it. Father raised in US, came back anti-communist. He said that prison was fair for being as wrong as he was. The Redbreast is his father's story - injured went to Austria, trenches stories from dad. Dad's friends shot in room whilst he slept. There are Norwegians descended from Nazi's breeding programme.

Norway is a young country. After WW2 wanted to say that they had a strong resistance but probably didn't.

[talking about the Utoya/Oslo tragedy] Norwegians do live in paradise but sometimes door opens and something comes in. He was in Oslo on a climbing rope at the time of the explosion and so didn't feel it. Felt weird and then with the news of Utoya it got unreal.

Will there be an impact like 22/7 or 9/11 on fiction?
He had no following so not the same, may be accepted as a tragedy, a natural catastrophe in time.

Trends in his books but are enlarged in fiction eg neo-nazis there since 70s but not a movement that will affect society politically. Norwegians not anti bankers like in Britain (or anti lawyers).

Scorcese film [of The Snowman] will go ahead so long as he stays healthy! There's a first draft of the script he thinks - tries to keep far from it - easy as they don't tell him anything! Dicaprio favourite to star as HH.

ML asks the killer question - you've been writing a HH about one every two years, is that still the case? JN says have you read Phantom? Is is a trick question? Fans will be pleased to hear that there will be another Harry Hole book.

Answers to questions from the audience:

Music has impacted his writing and his generation of writers maybe more than literature. Harry not a big fan of his band though!

All his all favourite writers are dead. What would he ask them? - Why do they write?

How similar is he to HH? Initially no similarities, didn't plan to be him but writing more about self as time goes on. There's a good deal of him in HH.

Latest book is a crime book for children, wasn't important that it was a crime story.

Why do you write? He likes the attention when people come up and say loved your novel. But this wouldn't make you become a writer as the likelihood of it happening is so small. We write because we read.

The end of HH is in his mind but not yet written. No resurrection though.

Phantom is bleak but not as depressing as first chapter of The Devil's Star. Got depressed and had to rewrite chapter a couple of time. Had to take 6 months off after writing TDS, Couldn't face writing Harry. Phantom based on research for The Redeemer.

Headhunters was an enjoyable book to write. Usually plan, write synopsis, but woke up with the idea and wrote it in 2 months.

Jackpot film - based on draft for a story he wrote a few years ago: 4 guys in a room, last working class guys in Oslo! Bet on a football game and win but cannot divide winnings equally as all need it more than others. Each plans to kill the other three!

He has experience with alcoholism amongst friends but can't generalise problem. If you do to much research you end up with general view rather than individual.

Consciously influenced by Sjowall and Wahloo - all writers are even if not aware of it.

Never has an agenda to focus on political issue but cannot write without politics.

[and the last question]

If you could have been a rockstar or a famous crime writer - which would you choose? 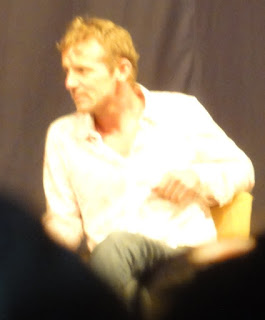 Also do read Mrs Peabody's account of the interview.

How fantastic, thanks so much for writing this up. He sounds so nice.

Thanks for the link, Karen, and a great write up. He did come across as being very nice, Maxine - very relaxed and open, with a nice sense of humour.