This is the last panel I went to on Friday, America's Got Talent. I've almost finished reading Gillian Flynn's compulsive Gone Girl and I have one of Megan Abbott's books in my tbr. And with John Connolly moderating you know you're in for a well-researched and witty time! This was a very good panel and spurred many a purchase.

We are thrilled to showcase four of the most acclaimed new crime writers in America. Ryan David Jahn’s Acts Of Violence won the New Blood Dagger while Sharp Objects by Gillian Flynn picked up not only the New Blood award but also the Ian Fleming Steel Dagger. Chris Mooney has received rave reviews from the likes of Michael Connelly and Dennis Lehane and Megan Abbott’s hugely praised The End Of Everything was a Richard and Judy Book Club pick. These four will be talking to one of this year’s special guests, John Connolly. 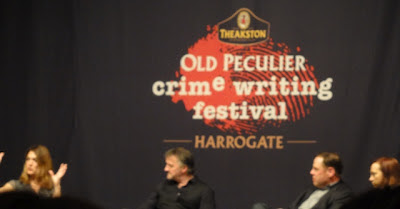 
JC opens by saying that his panelists are "linked by a common inability to pronounce aluminium. It's alu-min-ium."

It's soon apparent that Chris Mooney is the fall-guy for JC's jokes. JC makes several references to CM's Remembering Sarah which was Edgar-award nominated.

GF's first book Sharp Objects was described as having a moist tone and JC wanted to know what that was exactly! GF described it as a lush, sensual, Gothic tone.

(Incidentally Gillian is pronounced with hard G.) She writes for Entertainment Weekly Magazine, full of pop culture and writing gives her the opportunity to be the opposite so you won't find any pop culture references in Sharp Objects. Gone Girl is borderline crime fiction and very different to her first two books; she wanted to write about relationships and marriage, and then had to construct a mystery around it. Bleak look at married life.

In MA's Dare Me - the crime is almost incidental, not jacketed here as crime novel. MA was editor of school paper; cheerleaders remind her of soldiers, very athletic training nowadays.

Question from JC about the practice of putting people's ashes into strange things ("you Americans") and there is a company in the US putting ashes into bullets.

RDJ - screenwriter before but didn't like producers much, as they made changes based on structure rather than story based. He worked in reality tv and was fired. The Getaway/Thompson influence on The Dispatcher. Fascinated by violence as experienced in the moment not war as a subject.(He was in army)

MA is a movie lover, and gangster movies were always on when growing up.

GF's dad is a film professor so she saw Alien at age 7!

MA said that in the US, they are very influenced by the idea of lone man, outlaw and 50-75% are about a PI or a cop who is against the system.

(JC did ask which British writers they read: Mark Billingham's name came up but the panel didn't give the impression of reading many British authors.)

JC said he didn't moderate many panels as it was too much like homework but he thoroughly recommended these four authors.

I haven't read any of these authors apart from Gillian Flynn. Having read her first two books I was on the fence about Gone Girl, but I'll definitely give it a go now after your recommendation.