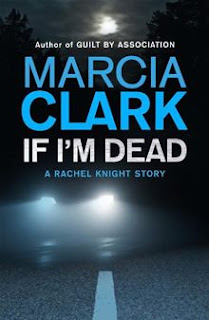 Marcia Clark's If I'm Dead is a short story available on Kindle or as Epub (99p at the moment, though free when I "bought" it).

It's set between her two full-length novels, Guilt by Association and Guilt by Degrees which I haven't yet read and as well as the short story you also get samples from these two books.

The problem with the Kindle version, with its % read is that I can't tell you the number of page numbers, however it is quite short.

Series character Rachel Knight, Deputy District Attorney in Los Angeles is prosecuting a tricky case. A rich heiress is presumed dead, killed by her husband whom she wanted to divorce. With no body and mostly circumstantial evidence can Rachel put away the presumed killer?

As Rachel is assigned to the Special Trials Unit she works with the police from the moment the crime is discovered which means that If I'm Dead is a mix of investigation and courtroom drama. You get to meet Rachel and her some of friends/colleagues, all female though called Bailey, Dorian and Toni and there is a cracker of an abrupt ending. I enjoyed it and it's done the trick of making me want to read the full-length books.

I've always been a fan of legal tv dramas such as Ally McBeal, Justice and Shark and this would have made a great episode for the latter two (though on opposing sides!).

Maxine at Petrona has reviewed Guilt by Association.
Posted by Karen (Euro Crime) at 1:00 pm