DVD News: Once Upon a Time in Anatolia

I mentioned this film Once Upon a Time in Anatolia earlier in the year when it had a limited release. Like so many subtitled films (Headhunters, Silence) I wasn't able to see it at the cinema however it has just been released on DVD and it's on my library's catalogue so I've reserved it. As it's classed as "World Cinema" it bypasses the top-title two-day loan category (non-reservable to boot) and goes straight to 7 day loan (£1.50). This is particularly useful for Once Upon a Time in Anatolia which is nearly three hours long so will be watched over several evenings! 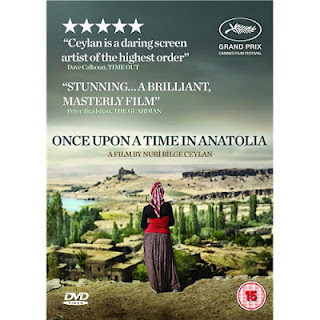 An epic and rigorous tale of a night and day in a murder investigation, Once Upon a Time in Anatolia is a beautifully photographed crime drama about police and prosecutors locating a buried body through one long night in the Anatolian steppes.

In the short prologue three men are drinking and talking. Then a convoy of cars is travelling around the countryside at night as one of the men seen earlier is trying to remember where a body was buried. After several false leads and a rest in a remote village, the body is finally discovered early the next morning. In the course of the long investigation the characters and hidden thoughts of the main protagonists are gradually themselves exhumed.
Posted by Karen (Euro Crime) at 12:00 pm

Labels: DVD, Once Upon a Time in Anatolia, Turkish film

The crime is only an excuse to dig into human nature with no manichaeism, religion or judgement. To be seen in one nignt. Wonderful photografy. A breeze of hope in the last scene...Your comment is poor focusing mainly in the crime.