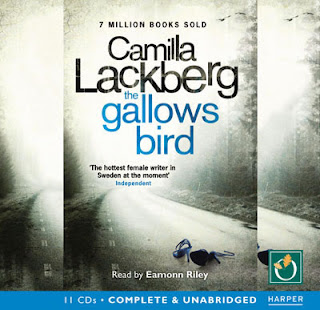 Over the course of the three previous books, childhood friends Patrik (police officer) and Erica (novelist) have reconnected, had a baby and are now preparing for their wedding.

Patrik is distracted from this happy event by first the death of a local shopkeeper in a car accident. She was apparently stonkingly drunk and yet she was a known teetotaller. The team, including new member, Hanna Kruse, make some enquiries but are diverted when a definite murder occurs: a member of a reality show being filmed in town is found dead in a rubbish bin. This high profile case takes precedence for a while until a nudge from the dead woman's partner puts them back on track.

As more information is unearthed the crime aspects of the story covers an increasingly wide temporal and geographical area. Patrik almost feels out of his depth but he is reluctant to call in the National Crime Police. Threaded amongst the investigation are scenes from the reality show of the cast bickering and working; Erica and her sister's Anna attempts to organise the wedding (including a hilarious scene with Patrik's mum); Patrik's boss Mellberg's new romance and some odd snippets from the point of view of two children isolated in a cottage in a forest.

There's so much going on you cannot get bored. As I was listening to this, I realised why I prefer to listen than read this series - though the advantage of hearing correct pronunciations is a plus point as well - but to me these books are like a soap opera especially as the author finishes the books on cliff-hangers leaving you eager to find out more. I like my crime, and if I had to read about all the non-crime related domestic stuff that's in these books I probably wouldn't find it that interesting and would find it a bit frustrating, and yet it's quite enjoyable to be told it when you're travelling or washing-up.

The crime set-up in The Gallows Bird is interesting and puzzling but the way the solution was discovered was rather disappointing. The Gallows Bird was first published in 2006 and though that's a few years ago, were small police stations not on the Internet (due to security reasons apparently) and was data transferred between pcs on a disk? No filing system for pre-computer days crimes either, just the memories of long-serving staff? A few quick Googles and the case would have been solved pretty promptly. It's apparent that the police team are not the brightest but the coup-de-grace is when Patrik goes to a library and asks the librarian to put some pages of a story in order for him, which the librarian does, and helpfully points out that a page is missing as the page numbers don't follow on!

Nonetheless, despite the holes in the plot and the quantity of non-crime related minutes, I was engrossed, as I have been with the earlier two audio books. They are entertaining, and I do so enjoy Eamonn Riley's narration. I'm looking forward to the library acquiring the next one, The Hidden Child.

More reviews of Camilla Lackberg's books can be found on the Euro Crime website.

Karen - Thanks for this fine review. It's interesting isn't it that some books and series are better enjoyed in audio format than in reading format. I've had that happen to me, too. I've had the opposite experience too. I really do wonder sometimes how much what we think of a story depends on how we've experienced it...

After listening to THE STONECUTTER i was a bit disappointed to have pre-ordered THE GALLOWS BIRD in paper as i though Riley a great narrator. Oh well will look forward to reading it anyway, a light read for when I don't want to think