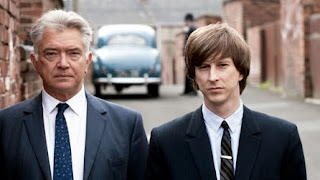 News from the BBC website of the two next episodes of Inspector George Gently, starring Martin Shaw and Lee Ingleby, a series loosely based on the long-running series of books by Alan Hunter:

This classic series, with its growling, passionate detective hero (Shaw) and his headstrong, un-pc sidekick, Bacchus (Lee Ingleby), lovingly recreates the Swinging Sixties as it finally hits the North East. Full of warmth and humour, seen through their "perfect" copper partnership, Inspector George Gently brings a colourful nostalgia to the period; when darned socks and a clout round the head were the norm. The series also gives a fascinating insight into a society on the cusp of change, and the difficulties that the police had to face in the Sixties to investigate and solve their crimes – without the help of modern technology.

Writer Peter Flannery says: "Inspector George Gently has taken on a new lease of life since the series came home to its geographical and spiritual roots last year. The city of Durham – in true Geordie fashion – has welcomed the show with open arms and the cast and crew simply love being there."

In the second film, Gently Upside Down, Gently and Bacchus are thrown into the new world of pop and media celebrity when a schoolgirl vanishes and her friend is catapulted into the public eye. Guest stars include: Neil Morrissey, Vincent Regan, Louise Delamere, Kaye Wragg, Sean Gilder and Christopher Coghill; introducing Kate Bracken.

A further two films of Inspector George Gently have already been commissioned by the BBC to be filmed in 2012.

You can read the whole article and more information on the episodes at the BBC website.

That chap on the right has a touch of the Don Bartlett about him, I think!