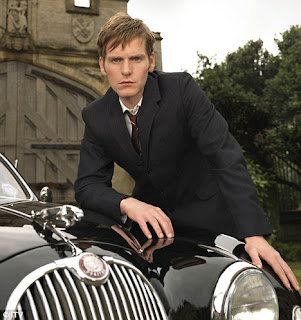 Inspector Morse is to return to TV screens in a one-off show about the detective's early career.

Endeavour, which will be filmed in Oxford, will feature The Take star Shaun Evans in the role made famous by John Thaw.

Set in 1965, the story revolves around a hunt for a missing schoolgirl and will give viewers the chance to see where the detective's love for crosswords and classic cars came from.

It is expected to air on ITV next year.

"Morse as a young man is a wonderful character that I'm very excited to be playing," said Evans.

"My hope is that we can complement what's come before, by telling a great story and telling it well."

In the Daily Mail's article, it states that "The programme has been written by Russell Lewis, but Colin Dexter, the creator of Inspector Morse, has been involved as an adviser."
Posted by Karen (Euro Crime) at 9:08 am

What a great idea for a show. The young man doesn't make me think of John Thaw in younger years, but perhaps his acting will make it okay. Hoping it makes it across the ocean.

My son watched some of the early filming of this show, but didn't manage to feature as an extra!