The Field of Blood - on BBC1 soon 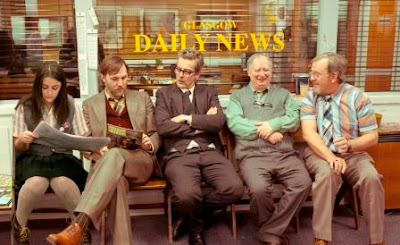 The Field of Blood based on Denise Mina's book of the same name will be begin on BBC1 on Monday 29 August between 10-15pm and 11-15pm. I'm not sure when the second part will be on yet.

From the BBC Press Office:

The Field Of Blood is set in Glasgow and centres on would-be journalist Paddy Meehan (played by Jayd Johnson), a young copygirl working in a newspaper office.

Paddy dreams of becoming an investigative journalist – believing that in miscarriages of justice, reporters are sometimes the only hope. Funny, smart and feisty, Paddy seizes an opportunity to kick-start her career and becomes embroiled in a dark murder case. For Paddy, it's the opportunity of a lifetime but it comes at great personal cost.

It's 1982 and Glasgow is shocked by the horrific murder of two-year-old Brian Wilcox. Paddy is fascinated by the story and waits, along with the rest of the city, for the inevitable arrest of a murderer. When Paddy's 10-year-old cousin is charged with the crime she faces a stark choice between the two defining elements in her life. On one side is her job at the paper and dreams of becoming a journalist; on the other is her tight-knit Catholic family who want her to stop all this career nonsense and settle down to a quiet life with her fiancé. Paddy puts family first and decides not to use her inside track on the story to secure her first scoop.

Unfortunately for Paddy, glamorous colleague Heather has no such scruples and the secret shame of the Meehan clan is splashed across the front pages. Shut out by her family, Paddy decides to look into the case to prove her cousin's innocence. Defying her boss, she sets about investigating the case but there are shocking consequences for someone close to her.

You can read interviews with the director and some of the actors at the BBC website.

It has been a while since I read any of Mina's books in the Meaghan series. I remember enjoying Field of Blood very much, and the 2nd somewhat less so. Then the third book was very gloomy, not exactly a joy to read. I recall that this series was originally proposed to be 5 books, going through various stages of the protagonist's life, but I'm wondering if Mina has recently confirmed that there will be a 4th or 5th book in the series? Or have we seen the last of PM? I wouldn't be surprised if Mina found she had dug a hole too deep from which to extricate herself/PM?