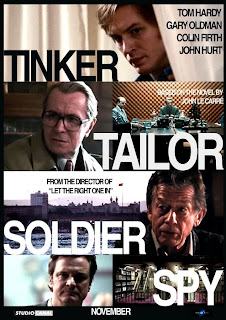 This looks fab, with a stellar British cast to rival Harry Potter and from the director of Let The Right One In.

"In the bleak days of the Cold War, espionage veteran George Smiley is forced from semi-retirement to uncover a Soviet agent within MI6's echelons."

Opens on 16 September, here's a not very spoilery (I think) trailer: