Ahead of Tinker Tailor Soldier Spy which is out in September, there are a couple more crime/action thrillers (released this month), one from Brazil and one from Japan:

Elite Squad (2): The Enemy Within

"A box office sensation in Brazil, Elite Squad: The Enemy Within continues director José Padilha's compelling and fiercely authentic account of the BOPE - Rio's special police battalion - in a fight against street crime where all bets are off. Set 13 years after the original, it's an unflinching glimpse of a country plagued by corruption on both sides of the law."

Out now in selected cinemas. 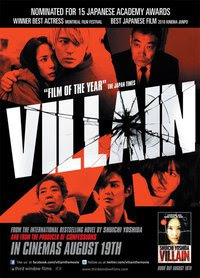 Based on the book Villain by Shuichi Yoshida, here thoughtfully reviewed by Bernadette at Reactions to Reading.