Crime drama - A Touch of Cloth 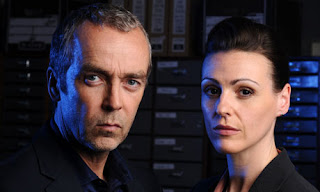 Charlie Brooker has written a crime drama spoof for Sky One, called A Touch of Cloth. Its stars are familiar with the genre having appeared in Rebus, Scott and Bailey, Marple and Poirot between them. From The Guardian:

A Touch of Cloth has been co-written with Daniel Maier, a writer on ITV1's Harry Hill's TV Burp, and sets out to be a "spoof of every British crime drama made in the last decade".

Hannah stars as DCI Jack Cloth, a "maverick, heavy drinking loner" who throws himself into his work after the death of his wife.

He is teamed with a "plucky, no-nonsense sidekick" played by Jones investigating a series of grisly murders. Rhind-Tutt plays their boss, Tom Boss.

Read the whole article here.
Posted by Karen (Euro Crime) at 10:29 am

When I first heard about this, I didn't connect it with Brooker and didn't know it was a spoof. Thank goodness you cleared it up! NOW it makes sense.