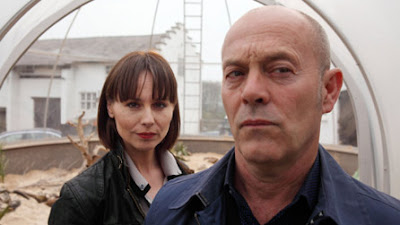 A few months ago I mentioned a proposed sequel to Waking the Dead, called The Body Farm which would focus on Dr Eve Lockhart played by Tara Fitzgerald. Clips from the show appeared in a recent BBC Drama trailer and a new press release has just come out:

Starring Tara FitzGerald, who reprises her role as Dr Eve Lockhart from the hit BBC One series Waking The Dead, and Keith Allen as Detective Inspector Hale, The Body Farm is an original new six-part crime drama series for BBC One.

The Body Farm centres around the work of a team of scientists, led by Eve Lockhart, working at the cutting edge of forensic detection. Their base is a remote farm from which, with the aid of donor bodies, they conduct research on behalf of Police forces around the world into the many ways in which murders can be committed and sometimes disguised. As the harsh economic climate eats into their funding, and the Home Office's own forensic facility falls victim to cutbacks, Eve accepts DI Hale's offer for The Body Farm to leave the hidden world of academic research for the visceral front line of murder detection. Eve, of course, is no stranger to murder in its many forms, but her new team find themselves rapidly thrust into an unexpectedly brutal new world.

Eve's team comprises Rosa, Mike and Oggy. Wunmi Mosaku (Moses Jones, Father And Son, I Am Slave, Silent Witness) is Rosa, an expert Botanist, who is young, beautiful and perhaps too eager to put her research into practice. Mark Bazeley (The Damned United, The Queen) plays Mike, haematologist, business partner and, most importantly, an old flame of Eve's. Finlay Robertson (How Not To Live Your Life) is Oggy, a Forensic medicine PhD with a computer obsession. Oggy has had his head buried in his Body Farm research for so long that he has begun to fear the real world.


The whole press release is here plus there are links to interviews with the cast from that page and details of episode 1.


Will you be watching The Body Farm?

I do like Keith Allen. And I really liked Tara's character Eve in Waking the Dead. Can't wait for this one.