Kerry Greenwood - published in the UK

Australian author Kerry Greenwood is probably better known for her Phryne Fisher series than her "Earthly Delights" series but it's the latter which has just made its debut in the UK. Orion have just published Trick or Treat, the fourth (groan) and latest in the series featuring baker Corinna Chapman. 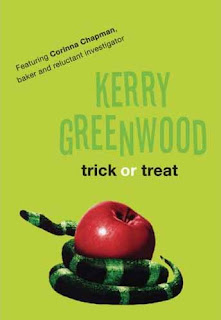 Synopsis: When a cut-price franchise bakery opens its doors just down the street from Earthly Delights and crowds flock to purchase the bread, Corinna Chapman is understandably nervous. Meanwhile, the gorgeous Daniel's old friend Georgiana Hope has temporarily set up residence in his house, and it doesn't take Corinna long to work out that she's tall, blonde, gorgeous and up to something. Daniel is making excuses and Corinna is worried about his absences and also the strange outbreak of madness which seems to be centred on Lonsdale Street.

Will Corinna win through a maze of health regulations, missing boyfriends, sinister strangers, fraudulent companies and back-alley ambushes? Or will this be the end for the Earthly Delights Bakery?

You can read more about the books and Corinna at the Earthly Delights website. Unfortunately the link to the Phryne Fisher site isn't working at the moment.

The right honourable Phryne Fisher is a flapper who has moved from England to Australia and gets into all sorts of scrapes. She has a gun, fast cars, planes and numerous lovers. I've only read the early ones but I have quite a few more in my tbr which I bought direct from Australia. More recently, this series has been published in the US by Poisoned Pen Press. (The covers are gorgeous).

Hopefully Orion will publish the earlier Corinna Chapman books and the Phryne Fisher books at some point. (I had thought they'd begun with the Phryne books but it seems I was mistaken).

I await the purchase of Trick or Treat by a library near me :).
Posted by Karen (Euro Crime) at 10:59 am

This is one of my favourite series Karen - how sad that you can't get them in order though. Publishers are very strange.