Having been away for a couple of days and doing plenty of train travelling (or waiting for a non existent train) I've been catching up with my podcasts. Nearly all are downloads from the BBC including Radio 4's The Film Programme. One such episode mentioned the 2007 French film Roman de Gare (aka Crossed Tracks) which was having a special screening for two weeks in London, unfortunately the final day has just gone. Roman de Gare is not yet on R2 DVD but it is on R1 (I think) and is coming soon to Australian DVD (April) which I believe is R4. 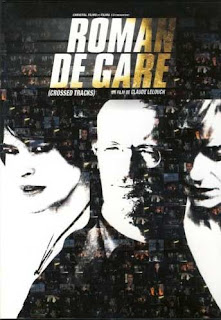 Synopsis: Best-selling author Judith Ralitzer (Fanny Ardant) is researching unlikely places to find characters for her next novel. As luck would have it, a serial killer with a penchant for magic tricks has just escaped from a high-security prison, providing the perfect source material for an intricately plotted, moody mystery. At the same time, her ghost writer Pierre (Dominique Pignon) gives a lift to a stranger, Huguette (Audrey Dana) who has been left stranded at a gas station after a huge row with her boyfriend. She and her life become Pierre's inspiration for the next Judith Ralitzer novel - but he's no longer satisfied to stay in the shadows, which sets up a clash of wills with the determined author.

The English language website for the film is here. There is a trailer in which nobody speaks and hence has none of those "off putting" subtitles...
Posted by Karen (Euro Crime) at 8:34 pm