One of the recent review copies to arrive chez Euro Crime is Geezer Girls by Dreda Say Mitchell which will be published in March. It has an excellent opening and I've copied a bit from the author's website: 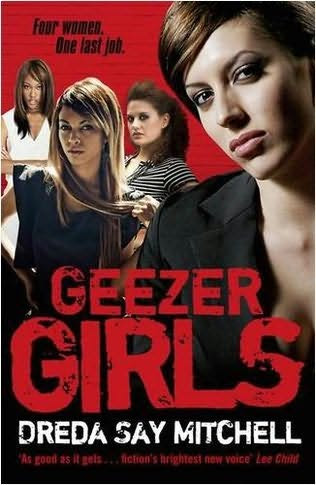 The bride and bridesmaids stared at their guns.

They stood in one of London’s hottest clubs. On the middle floor. In a room that was two floors up from the silent dance floor, two floors down from the Members Only spa. They stood in a semi-circle. Around the table where the guns lay. The bride, Jackie Jarvis, dragged her gaze away from the shooters. Stared directly at her three friends. Roxy. Anna. Ollie.

Finally she broke the silence. “Ollie’s right, he’s coming to get us, I know he is. And we can’t take the chance that he might not come to the church.” She stopped. Her tongue did a nervous flick across her lips. “If you want out, now’s the time to say it.”

Once again, she gazed at her friends.

“You know me girl.” Anna gave Jackie a half smile. “I’m always in.”

Jackie nodded. “OK, this is the set up. Anna and Roxy there’s no need for you two to be tooled-up. But as soon as we hit the church you both become our eyes. Check the place over, up and down, to see if he’s there.”

The glow in Jackie’s green eyes became grim. “If that bastard has the brass balls to gatecrash my wedding…” She stopped. Eyeballed the guns. “Me and Ollie will have no choice but to blow him away.”