The weekly reviews update has been delayed a bit as Petrona, Petrona's daughter and I took in Kenneth Branagh and co performing Ivanov this afternoon. I enjoyed it hugely and found it more comprehensible than Thursday night's Love's Labour's Lost, though that had David Tennant :-) which compensated for when I couldn't understand or hear the dialogue. 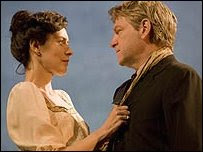 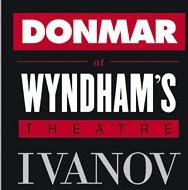 There's a round-up of reviews of Ivanov on the BBC website. The same site also has a 9 minute interview with Kenneth Branagh (recorded before he was forced to withdraw from directing Hamlet). About half way in there's a bit about the forthcoming Wallander series and Henning Mankell plus a clip from the show (one of the actors featured is also in Ivanov).
Posted by Karen (Euro Crime) at 9:45 pm

Oooh lucky lucky you! - I was desperate for tickets (I'm a big fan of the glorious Ken!) but they were all sold out, sob ...

Glad it was good though!

It was lovely, especially the company ;-)
According to the newspaper, you can get day tickets still, but this may mean you have to go to the theatre to get them in the morning, which if so is often not easy.