The Sherlock Homes: Nemesis game has been out since May but it only came to my attention when I read a review at the weekend in one of the Saturday supplements (can't find an online link). 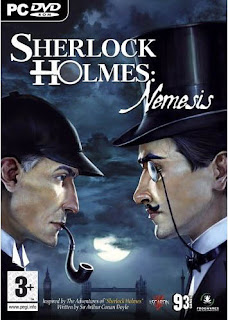 The Game: After coming face-to-face with the mythical Cthulhu in his previous adventure on PC (“The Awakened”), Sherlock Holmes confronts Arsène Lupin, the gentleman-burglar made famous by the literature series penned by French writer Maurice Leblanc. Arsène Lupin, whose exploits are enjoyed by millions of readers throughout the world, provides the perfect foil for Holmes as he attempts to pull of the ultimate heist.

This battle of wits between the most famous detective of all time and the world's greatest thief takes us to late 19th century London. Arsène Lupin is a young French burglar at the beginning of a glittering career, who comes to town with one goal - defy Scotland Yard and Sherlock Holmes. He states that he will steal five objects of immense value in five days from prestigious sites such as the National Gallery, the British Museum, the Tower of London and even Buckingham Palace! Sherlock Holmes must use all his daring and ingenuity to avoid a terrible humiliation for England.

Read more about it and other Holmes games available at the official website.
Posted by Karen (Euro Crime) at 10:11 am

I had no idea Sherlock Holmes was doing his thing on PC! Thanks for the post.

I've posted about it on my blog Overkill, with a nod to yours.