The Girl Who Played with Fire - mini extract

The second part of Stieg Larsson's Millennium trilogy, The Girl Who Played With Fire, will be out in January. Meanwhile the cover art is available along with a synopsis plus I have a brief extract lifted from a print copy of The Bookseller magazine from last November: 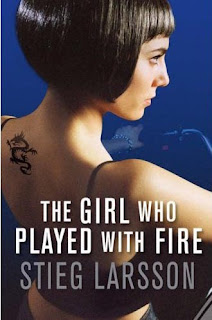 Extract: She lay for several minutes looking at the narrow strip of light above the door. Then she moved and tried to feel how tight the straps were. She could pull up her knees a bit, but the harness and the foot restraints grew taut immediately. She relaxed. She lay completely still, staring at nothing.

She waited. She fantasized about a gasoline can and a match.

She saw him drenched with gasoline. She could physically feel the box of matches in her hand. She shook it. It rattled. She opened the box and selected a match. She heard him say something but shut her ears and didn't listen to the words. She saw the expression on his face as she moved the match towards the striking surface. She heard the scraping sound of sulphur against it. It sounded like a drawn-out thunderclap. She saw the match burst into flame.

She smiled a hard smile and steeled herself.

That was the night she turned thirteen.

(caveats - any typing errors are my own and this was probably from the proof copy and may not be the final version.)

Synopsis: Lisbeth Salander is a wanted woman. Two Millennium journalists about to expose the truth about the sex trade in Sweden are brutally murdered, and Salander's prints are on the weapon. Her history of unpredictable and vengeful behaviour makes her an official danger to society - but no-one can find her anywhere. Meanwhile, Mikael Blomkvist, editor-in-chief of Millennium, will not believe what he hears on the news. Knowing Salander to be fierce when fearful, he is desperate to get to her before she is cornered and alone. As he fits the pieces of the puzzle together, he comes up against some hardened criminals, including the chainsaw-wielding 'blond giant' - a fearsomely huge thug who can feel no pain. Digging deeper, Blomkvist also unearths some heart-wrenching facts about Salander's past life. Committed to psychiatric care aged 12, declared legally incompetent at 18, this is a messed-up young woman who is the product of an unjust and corrupt system. Yet Lisbeth is more avenging angel than helpless victim - descending on those that have hurt her with a righteous anger terrifying in its intensity and truly wonderful in its outcome.

and finally, do read the Euro Crime review of the first book in the trilogy, The Girl with the Dragon Tattoo.
Posted by Karen (Euro Crime) at 8:21 am

Labels: Stieg Larsson, The Girl Who Played with Fire

Of course, I am looking forward to this. But I don't imagine Liesbeth as looking like the rather fashion-conscious, hard-as-nails model on the cover. I like the blue, though, lovely and deep, like the red in the first novel. Do you think the third will be green?

Hmmmmmm this is so exciting

That level of grooming certainly doesn't look like Lisbeth, but at the risk of dropping a very slight spoiler, she is a bit more concerned about her appearance in the opening of the novel.

in my hands i have a proof copy of this novel. i haven't read it yet, but if anyone is interested in reading it after me, i'd like to know...

I would love to read your copy! Do you still have it?

...and I'm so jealous of you foreigners! Why? Well, for starters: I have already read all three Millennium books and have nothing more from Stieg to look forward to. I felt as being stuck in a vaccuum for days after finishing the triology - what to read now? That's how good these books really are.

The second and third book is even better than the first one, guaranteed!

The first book is just a mere 500 page introduction of characters before the real story kicks off in the second and third book. These two books are actually one book/one story split in half. I imagine you'll have a long wait for the final book.

One thing I'm looking forward to though is the first film released at cinemas in february. I believe that the production team has choosen the most perfect actors for the Lisbeth (Noomi Rapace) and Mikael (Mikael Nyqvist) character. I believe that Noomi will to be able to justify the Salander character - check google picture search. Having seen her acting in other productions I'm confident.

There is some discussion on the Stieg Larsson site and many people feel that Noomi Rapace is not the Lisbeth Salander of the books.
Of course make up artists can do wonders [e.g.Charlize Theron in Monster] but Lisbeth is supposed to be a 23 year old who looks 14!

Noomi is a very mature 28 year old and certainly not as I had imagined Lisbeth, neither is the cover girl.

I was very disappointed with the first book, the 500 page introduction um, and the comment about 2& 3 being one book split in half makes me wonder how much padding we will get in 2&3.

The marketing campaign so far has been brilliant far better than the book.