The latest of Christopher Fowler's Bryant & May series to be made available on audio book, is White Corridor. Like its predecessors, Full Dark House, The Water Room, The Seventy-Seven Clocks and Ten-Second Staircase it's superbly narrated by Tim Goodman and I found this one to be the most humorous of the lot.

The premise behind the books is that John May and Arthur Bryant are two elderly detectives, way past retirement age who head up the PCU: The Peculiar Crimes Unit in an office above Mornington Crescent tube station. In the previous books, as well as the other PCU staff, London has been a major character. The books ooze arcane knowledge of the great city. This time though, the 'boys' are stuck in a snow storm and there's a suspicious death back at PCU HQ. It's up to the PCU's very own 'Diana Dors' to work out what's happened, guided by mobile phone conversations with Bryant and May whilst they track down a killer in the snow.

Yvonne Klein has already reviewed The White Corridor, for Euro Crime, and I agree totally with her. This is a series not to be missed either in print or on audio. I've checked the book out of the library to get a couple of quotes: 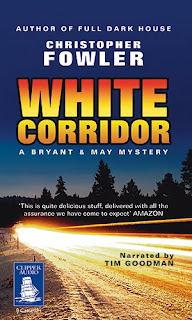 [May] had always prided himself on his ability to embrace change, and had at least retained a walking pace beside the growth of modern police technology, adopting new techniques as they arrived. Bryant, on the other hand, loitered several metres behind each development, and occasionally drifted off in the opposite direction.

and after finding themselves stranded in a blizzard (on their way to a Spiritualists' Convention):

"Look on the bright side, John. We've plenty of warm clothing in the back. You helped me pack all those outfits for the show."

If you think I'm sitting here dressed in a fig-leaf body stocking and a Protestant cleric's cassock, Arthur, you're sadly mistaken."