From the Daily Mail:

In the first commercial deal between an author and the police, a £9,000 Hyundai Getz will soon be patrolling the streets of Sussex, embellished on all four sides with the name of Peter James.

His series of Brighton-based Roy Grace novels has sold more than three million copies worldwide and been translated into 30 languages. 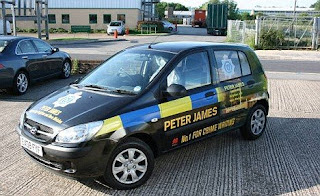 Read the rest of the article here and read the Euro Crime reviews of his best-selling series - here.
Posted by Karen (Euro Crime) at 9:04 am

will confuse the public no end I imagine.

What happens if Peter James gets drunk, and the local constable in this very car is called to the scene?
===================
Detectives Beyond Borders
"Because Murder Is More Fun Away From Home"
http://detectivesbeyondborders.blogspot.com/