Rome Noir edited by Chiara Stangalino and Maxim Jakubowski will be published next February. One of the Noir series from Akashic, it will contain new stories from: 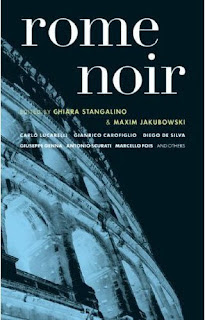 From Akashic's website: Rome Noir looks beyond the tourist facade of Italy's capital. This is the real city of Fellini, Pasolini, and countless other major artists who devoted their lives to depicting the grandeur and decadence of this ever fascinating metropolis.

Both a modern city suffocated by traffic fumes and cars and a repository of knowledge and Classical monuments, Rome (with its hills and ruins) is a perfect conduit for an excursion into the many facets of modern noir. Here, Rome takes a place of honor amongst Akashic's growing collection of anthologies devoted to the dark streets of cities. Assembled by award-winning British editor and writer Maxim Jakubowski, who has enjoyed a long relationship with Italy, and Italian conference organizer and filmmaker Chiara Stangalino, Rome Noir collects some of the biggest talents of the Italian crime and literary scene.

From Stazione Termini, immortalized by Roberto Rossellini's films, to Pier Paolo Pasolini's desolate beach of Ostia, and encompassing famous landmarks and streets, this is the sinister side of the Dolce Vita come to life, a stunning gallery of dark characters, grotesques, and lost souls seeking revenge or redemption in the shadow of the Colosseum, the Spanish Steps, the Vatican, Trastevere, the quiet waters of the Tiber, and Piazza Navona. Rome will never be the same.
Posted by Karen (Euro Crime) at 9:32 am