David Suchet in The Last Confession

David Suchet is taking time away from Poirot to play another sort of detective, this time on the stage. He will play Cardinal Benelli in 'The Last Confession' which is about the death of Pope John Paul I. 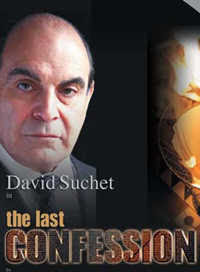 The Vatican 1978: a little-known Cardinal from Venice is elected to succeed Pope Paul VI. A compromise candidate, he takes the name Pope John Paul I, and quickly shows himself to be the liberal the reactionaries within the Catholic Church most feared.

Just thirty-three days later, he is dead. No official investigation is conducted, no autopsy is performed, and the Vatican’s press release about the cause of death is later found to be, in large part, false. And just the evening before his death, John Paul had warned three of his most influential but hostile Cardinals that they would be replaced.

His death marks the climax of fifteen troubled years of controversy and machination within the Church; schisms threaten its unity and the shadow of the Mafia hovers over its financial affairs. Only Cardinal Benelli has the power to challenge the dead Pope's enemies.

This incisive new thriller tracks the dramatic tensions, crises of faith and political manoeuvrings inside the Vatican surrounding the death of the man known as ‘the Smiling Pope’.

Wikipedia has a page on conspiracy theories about Pope Jean Paul I.
Posted by Karen (Euro Crime) at 4:19 pm

I am sooo envious (and rather more than slightly cross, I have to say) - I and a myriad of other people in/near Woking had booked to see this play recently, but the people putting the play on cancelled their run at Woking as they felt we weren't important enough and they'd do better business by getting to London earlier!! So the poor theatre had to send all our tickets back and are hugely embarrassed by it all.

I would have LOVED to see it, but I'm certainly not taking my business to London to do so! Provincial theatre has enough trouble surviving without this sort of thing becoming a regular occurrence ...

I have just seen the play in Bath. Absolutely fantastic. Well worth the effort to go out of one's way to see it.

Just come back from seeing 'The Last Confession' at the Haymarket - brilliant and so true to the facts. David Suchet and in fact all the caste were superb - I wouldn't have missed it for anything.
ABS

I am sitting in Toronto Airport for a flight to London. We'll be seeing the play on Saturday evening, the last performance of its run.

Reallly looking forward to it. Last saw David Suchet in Amadeus a few years ago.