I've stumbled over another Spanish crime writer to add to my database - Francisco García Pavon. According to 'G J Demko's Landscapes of Crime':

In the 1950s and 60s Francisco Garcia Pavon wrote a number of mysteries that featured Chief of Munincipal Guard Manual Gonzalez "Plinio". The "Plinio" books were very popular and won a number of prizes and even some acclaim abroad ( see Los Liberales — in English- Barcelona, Ediciones Destino,1971). Plinio is a very non-heroic detective working in a small city who’s premonitions and hunches are more important than scientific and logical deduction. Pavon has been referred to as the Spanish Proust of the common people.

The only crime book of his translated into English and vaguely in print is, 'The Crimson Twins', published by Allison & Busby in 2000. 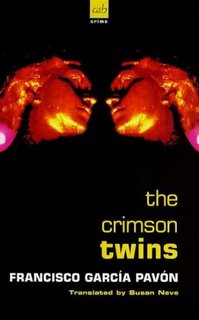 The Pelaez sisters, both spinsters in their 60s, disappear following a telephone call. Chief of the local police force, Plinio, finds bizarre clues in the sister's flat - a foetus in a specimen jar, a room full of dolls - and realises there is more to the case than meets the eye.

Is it me or is this one creepy cover....

Spain rocks as far as I'm concerned - since my 2nd book recently came out in translation over there.

And no it's not just you - that cover definitely does send shivers down the spine ...