I have one of our younger borrowers (at the library) to thank for my recent discovery, as she ordered in all three books in this hitherto unknown series to me. The books are aimed at 8+ and may also appeal to cat lovers a few decades older than that. I haven't read them yet but I'm keen to try one.

From the publisher's website (Mogzilla, I kid you not):

The Spartapuss novels are a unique series of books set in an ancient Rome ruled entirely by cats. The plots are based partly on historical events as recorded by the great classical writers Tacitus and Suetonius. Each short but perfectly formed book is crammed with silliness. Kids and critics are warming to the cleverly drawn characters, accurate historical description (as far as you can be given the cat aspect) and most importantly, page turning plots that can inspire the most reluctant of readers to finish a book. 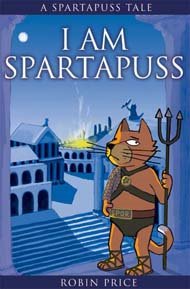 The first book is 'I am Spartapuss'. All synopses are from the publisher's website:

"Spartapuss' diary tells of how a Kiton slave became a prisoner, the prisoner became a gladiator. But will the gladiator become history?

Rome AD 36. The mighty Feline Empire rules the world. A ginger cat is comfortable managing Rome’s finest Bath and Spa complex. But Fortune has other plans for him. There’s a nasty incident in the Vomitarium. He’s arrested and imprisoned by Catligula, the Emperor’s heir and favourite. Released into a school for gladiators, our Fraidipuss hero must fight and win his freedom in the Arena - before his opponents make mouse-meat of him." 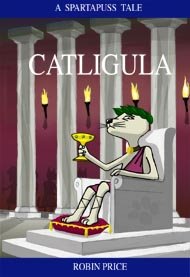 The second book is 'Catligula':

"In the second book in the Spartapuss series, history takes a terrible turn for the worse as Catligula takes control. Rome’s new ruler toys with his empire like a captured mouse. He’s mad, bad and dangerous to stroke.

When Spartapuss starts a new job at the Imperial Palace, Catligula wants him as his new best friend. The Spraetorian Guard plot to tame the power-crazed puss before he ruins the empire. But will Spartapuss play ball?" 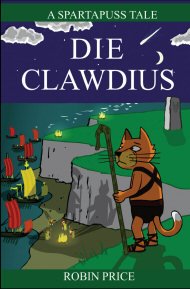 The third and latest book is 'Die Clawdius':

"The most gripping adventure yet in the acclaimed Spartapuss series... Clawdius, the least likely Emperor in Roman history, needs to show his enemies who’s boss. So he decides to invade Spartapuss’ home – The Land of the Kitons. As battle lines are drawn, Spartapuss must take sides. Can the magic of the Mewids help him to make the right choice?"

The first chapter of each book can be downloaded at the website.
Posted by Karen (Euro Crime) at 12:15 pm

Oh boy, they look great fun! Thanks for that, Karen.

Detectives Beyond Borders
"Because Cats Can Be Killers, Too"
http://www.detectivesbeyondborders.blogspot.com/

Hey Karen - what a great find - will pass this info onto my cat loving daughter :) maybe she will buy them and lend them to me - LOL!!!

Adding to what my esteemed friend Peter said - I do like cats but couldn't eat a whole one :D

These look good, I will show them to Jenny (11), who is in her first year of learning Latin at school. Thanks for the tip. Mind you, when she bought a "taster" book of Caroline Lawrence's "Roman Mysteries" (Word Book Day £1.99 book) she was not impressed by the inaccurate historical detail, so not sure what she will make of these;-) But I can always read them anyway, they look fun.

Hi all - hope you do enjoy my books - I had a great time writing them and I hope that shines through. I can't claim to be a huge expert in the history - just an interested amateur. My two main sources were Tacitus and Suetonious - which are the big hitters of Julio Clawdian history. Like Suetonious I guess that I don't want to let history get in the way of a good story! If these books can get kids into history (and the classics) in a fun way then that can't be a bad thing.
I'm always really interested in reader feedback so do feel free to drop me a line via the mogzilla website www.mogzilla.co.uk. I'm currently working on the fourth in the series - which is called Boudicat. But lots of research needed... better get back to it.
All the best