Sam Christer's The House of Smoke came out in March (UK) and Will Thomas's Anatomy of Evil will be out in September (US). 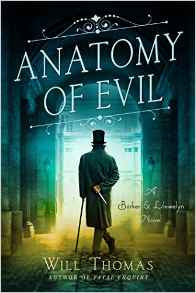 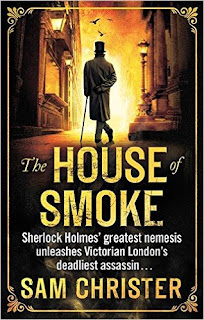 The House of Smoke blurb from Amazon:

Big Ben chimes in the first seconds of the first day of 1900, the start of a fresh century. Inside London's oldest gaol, preparations are afoot to hang Victorian England's deadliest assassin, a man wanted for two decades' worth of murders.

Cold-blooded killer Simeon Lynch has lived a brutal and glorious life in the employ of the House of Moriarty - the most feared criminal enterprise in the world. Now, as he faces the noose, Simeon learns dark truths about his master, about Sherlock Holmes and about his own past. Truths that make him determined to escape and kill again...

Follow Simeon's bloody footsteps through the capital's cobbled alleyways, wretched workhouses and flash taverns as he crosses swords with Sherlock Holmes and the villainous characters of Victorian London.


Anatomy of Evil blurb from Amazon:

Cyrus Barker is undoubtedly England's premiere private enquiry agent. With the help of his assistant Thomas Llewelyn, he's developed an enviable reputation for discreetly solving some of the toughest, most consequential cases in recent history. But one evening in 1888, Robert Anderson, the head of Scotland Yard's Criminal Investigation Department (CID), appears at Barker's office with an offer. A series of murders in the Whitechapel area of London are turning the city upside down, with tremendous pressure being brought to bear on Scotland Yard and the government itself.

Barker is to be named temporary envoy to the Royal Family with regard to the case while surreptitiously bringing his investigative skill to the case. With various elements of society, high and low, bringing their own agenda to increasingly shocking murders, Barker and Llewellyn must find and hunt down the century's most notorious killer. The Whitechapel Killer has managed to elude the finest minds of Scotland Yard and beyond he's never faced a mind as nimble and a man as skilled as Cyrus Barker. But even Barker's prodigious skills may not be enough to track down a killer in time."