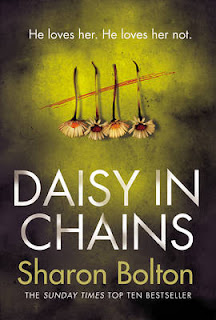 DAISY IN CHAINS is a standalone psychological thriller by Sharon Bolton set in South West England. The protagonist is Maggie Rose, a highly successful barrister and true crime author. Maggie has moved away from court appearances to writing true crime books, carrying out her own research to help overturn unsafe murder convictions on behalf of her clients.

Her latest client is Hamish Wolfe, a young, dashing, arrogant doctor imprisoned at Parkhurst on the Isle of Wight, after being convicted of a series of a killings involving four overweight young women. The women were lured to their death by a malevolent, internet, stranger who set up a false identity to tempt them into meeting him.

Hamish's mother, Sandra, and a motley array of supporters, the “Wolfe Pack”, are determined that Wolfe is innocent, and persuade Maggie to take on his case. Maggie looks to have an uphill struggle as the evidence against Wolfe was strong: both circumstantial and forensic. Unfortunate rumours have followed him from his university days, that he has a history of exploiting fat women with his friends and making sex tapes without their permission.

Despite (or because of) the nature of his crimes, Wolfe receives over a hundred letters a month, mostly from women. Maggie soon finds she has a rival in the “Wolfe Pack”, a young woman jealous of her prison meetings with Hamish. Maggie herself has to guard against Hamish's attempts to charm and manipulate her. She also has the police to deal with; the detective responsible for Wolfe's arrest is keeping a careful eye on the re-opening of his case.

I found DAISY IN CHAINS an enjoyable, compelling pageturner, with twists and turns that reminded me of Pierre Lemaitre's Verhoeven trilogy. Sharon Bolton skilfully builds up tension, carefully giving the reader clues about the details of the court case and its effect on the police and families involved. The author also casts an interesting light on the phenomenon of the magnetic attraction of convicted killers to outsiders, especially women.