Review: The Women of the Souk by Michael Pearce 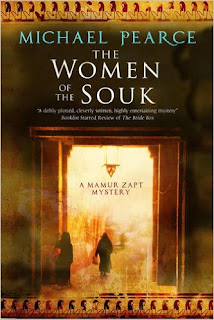 It's Cairo, Egypt at the turn of the twentieth century. Britain has been invited by the Khedive who is the ruler of the country, to assist in the running of Egypt. The Mamur Zapt is the head of the secret police, a political appointment and this position is held by a Welshman, Captain Gareth Cadwallader Owen. Many Egyptians resent the British involvement. Against this background our story begins.

A young woman, Marie, still at an exclusive school and from a wealthy family is kidnapped. One of her school friends approaches Owen to implore him to get involved with gaining her release. This can be tricky as a ransom is demanded and if paid too quickly could elicit further demands. If the kidnappers feel they are being ignored the girl could be murdered.

The Khedive feels that the Mamur Zapt's involvement is crucial. So begins a slow and tortuous negotiation with the kidnappers. The local Souk – a market place – hold the key to this dilemma. The local women although by tradition they have to demur to the menfolk, times are changing, and they bring their influence to bear.

THE WOMEN OF THE SOUK is full of interesting characters: the kidnapped girl's boyfriend Ali Shawquat, who is a renowned musician; Marie's school-friend Layla and the young girl who she walked to school with, Minya; Owen's officers Nicos, Mahmoud, Georgides and Selim; the man representing Marie's family, Ali Osman Fingari; the scent-maker in the bazaar and of course the women of the souk, who should wear burkas but have more modern ideas. Owen himself is married to an Egyptian woman, Zeinab.

This is the nineteenth book written by the author featuring tales of the Mamur Zapt. Though the story moved very slowly, but inexorably to its conclusion, it is well researched and made me want to know more about Britain's involvement in Egypt during this period. Recommended.