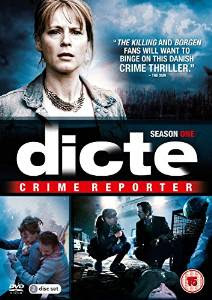 The first series of Dicte - Crime Reporter the Danish crime series based on Elsebeth Egholm's novels, which recently ran on More 4 is available on DVD from today.

Following her divorce, investigative journalist Dicte (Iben Hjejle) moves back to her home town of Aarhus, along with her teenage daughter Rose. Dicte soon tangles with local police detective Wagner played by Lars Brygmann (Unit One, Borgen) and by the end of the first couple of episodes he's hoping not to see her again but of course that's not going to be the case!

The two-disc box-set has the episodes in their original ten-episode format ie 5 stories in two parts.

[I'm half-way through the series so I may return to the subject later on but so far it's enjoyable if a little full of coincidences.]
Posted by Karen (Euro Crime) at 9:00 am