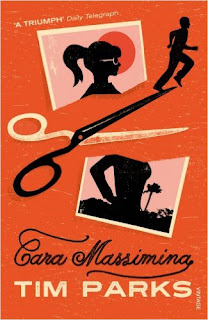 Morris Arthur Duckworth is a down-at-heel English teacher in the Italian city of Verona. His life is financially precarious, always one step ahead of the gas being cut off in his flat, and largely reliant on providing additional private tutorials for his wealthier students. Morris simultaneously despises them and yearns to join them as an equal in wealth and lifestyle.

"He loved taking care of beautiful things... Normal things he was rather careless about (his scuffed shoes, for example) but with beautiful things it was different (and that was the mystery in the end, to have opened one's eyes in North Acton and yearned for class and style before he even knew they existed). And Morris thought that when one day he had finally got a good number of beautiful possessions together, he would spend a long time looking after them and get a great deal of pleasure from it."

His student Massimina seems to offer a step up. She is beautiful, biddable, and deluded enough to have fallen in love with Morris. She is the third daughter of a wealthy family. She is also, unfortunately, seventeen, which means he cannot marry her for several months.

Before you feel sorry for Morris, you should know that he is a liar, a petty thief, and an embryonic blackmailer, driven by an unjustified sense of self-pity. In many ways he is similar to Patricia Highsmith's Tom Ripley (a similarity heightened by the Italian setting). He flunks his crucial first meeting with Massimina's family by getting caught lying about his prospects.

"Morris then very casually mentioned the names of three Veronese companies he was working with closely at the moment... Names you saw on posters and local television commercials. There was a fair chance, of course, Verona being the tiny tight-knit place it was, that either the signora or Bobo would know people in these companies. By precisely the aplomb with which Morris took that risk should prove the clinching factor."

An elopement seems like the obvious next step. But is it an elopement or a kidnapping? Morris doesn't seem quite sure himself. And is the studiously asexual anti-hero actually falling for Massimina?

"Massimina was in a complete mess. Red in the freckled face, make-up all over the place, hair tousled, body apparently quite shapeless in a running outfit of all things. And out of breath to boot - nostrils flaring and eyes puffy. Rather horrible."

CARA MASSIMINA is the first of three books featuring Morris Duckworth recently reissued by Vintage. The first two were originally published in the '90s and CARA MASSIMINA is a reminder of simpler times when kidnappers had to buy newspapers to compose their ransom demands and find out if the police were after them. The Italian setting (informed by Tim Parks' own time as an English teacher in Verona), inexorable plot, sort-of-likeable antihero, and relatively short length make this an ideal holiday book. Good fun.