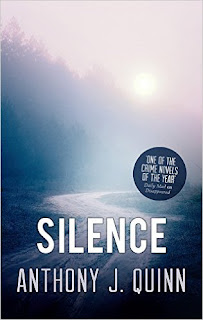 The motorway cut through a narrow valley, and Daly crossed a bridge. He glanced through his side window, and saw the old country below, felt its dark gravity, its mesh of forgotten roads, its interlocking parishes of grief and murder.

South Armagh, 1974.
During the rain's onslaught the group of policemen in waterproof overalls continue their task at the river's edge: a rhythmical plunging of their prisoner into the waters, hauling him out, interrogating, pressing him back down. Finally a gun is placed against the half-drowned man's neck. Then its muzzle is brought round to face him and the trigger is pulled. Click, no bullet. They drag him out of the water, dump him on the mud, and retreat to their Land Rover. After a pause they drive away. Shaken, cold and confused, the young man staggers through a thorn thicket towards the road when a voice tells him how lucky he has been that day. A man steps forward from the trees and introduces himself as a recruiting agent for a special intelligence unit. Explaining that “we must all choose carefully the gangs we join”, he offers the young man money, training, and protection for the his parents in these difficult times.

February, 2013.
The call comes whilst Inspector Celcius Daly is preparing for bed. A fatal car crash on the new motorway. Daly arrives to find the familiar sight of police tape and flash-lights. Figures walk to and fro amongst the heavy digging equipment as a police officer explains that they were called out by reports of diggers being vandalised. They found the diversion signs and traffic cones rearranged, leading towards a drop of some thirty feet, so they set up a cordon and were replacing the cones when an elderly driver, Father Aloysius Walsh, drew up. For some reason he took fright and drove off again at high speed. He followed the misplaced cones and was killed when his car went over the edge into the bushes below.
Daly walks through the watching police and down the thorny slope to the crashed car. He notes that there are no skid marks on the road, no attempt to brake on the part of the elderly priest. He studies the body, fascinated by the ragged bundle of rosary beads and holy charms in the priest's dead hand which speak to Daly's own Catholic upbringing. He looks up at this point and spots a man who turns to face the light of his torch, Detective Irwin of Special Branch, a man always hovering at the edge of his investigations. Stopping for petrol on his way home down the rural lanes, Daly asks if there is a holy well in the area. The garage man's answer is hostile but Celcius Daly is used to it, born and raised a rural Catholic, now part of the “modern, integrated” Police Force of Northern Ireland, hostility is something he knows about …

SILENCE is Anthony J Quinn's third “Celcius Daly” novel and his protagonist, Daly, is that familiar, necessary figure for readers of crime fiction – the “loner” detective. Celcius Daly is a divorced, rural-born detective who has returned to live in his childhood home, an isolated, lakeside cottage. He is a man still unsure of his place in the modern Police Service of Northern Ireland. The central crime of Quinn's previous novel, BORDER ANGELS, was the very contemporary one of sex-trafficking but the manipulated, violent past of Quinn's border country is never far away in his fiction and with SILENCE we return to that ground. A car crash kills an elderly priest from a Belfast abbey and the priest's obsessional research into a series of callous sectarian murders during the Troubles reopens the tragedy of Daly's own childhood – the death of his mother and his father's profound silence about it. Fascinated by a painstaking map with its tangled lines of killings and dates which he finds in the priest's study, Daly is drawn to investigate Father Walsh's death and is led back into a world inhabited by old spies, old spy masters, old hatreds and old crimes.

In SILENCE Quinn acknowledges his fellow Northern Irish writer Stuart Neville's THE GHOSTS OF BELFAST (THE TWELVE (UK)) during a passage of conversation, between Daly and an old informer, about differing responses to the ghosts that haunt a violent past. Quinn's crime writing, well-plotted and threaded with suspense, looks to those same ghosts and while he does not provide Neville's blood-pulsing rides towards thrilling conclusions, Quinn does give us speculations and meditations upon life in that see-saw world. The atmosphere of SILENCE is inseparable from Quinn's rural landscape, filled with forgotten thickets, fields, waterways and ruined cottages. It is a landscape which affords Quinn a retrospective of the equally muddy events of the past from a present still peopled by its ageing protagonists and ghosts. Be prepared for the rain, the mud and the loneliness of Daly as he sits by his peat fire clutching a little black hen. Be prepared for the ever present waters of Lough Neagh and a way of life that is fast disappearing but above all read SILENCE, a grand continuation of Quinn's “Celcius Daly” series.