Review: To the Top of the Mountain by Arne Dahl tr. Alice Menzies 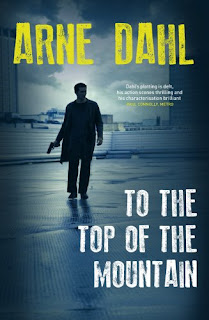 “Should we check, then?” asked Paul Hjelm. “If all this is just a figment of our imagination, two frustrated CID officers who aren't happy with it being just a pub brawl?”

Stockholm, Midsummer – Paul Hjelm and Kerstin Holm of the city's Violent Crimes Division are interviewing witnesses about the killing of a football fan during a bar-fight between rival supporters. Their young witness is quiet to the point of being uncooperative, claims to have had his back to the fight and to have been reading a book the whole time. All right, he had turned round now and then and he had heard the crack and had seen the blood streaming from the guy's head. When there had been a rush for the exit, before the doormen blocked it, the killer had been one of the first to get out, alongside the other Hammarby fans. Most of a group by the door got out as well.
Kerstin and Paul have only recently been reunited as work colleagues after the beak up of their old unit. Its members had been dispersed to various squads and their boss Hultin “retired”. After Kerstin takes the witness off to the police artist in an attempt to get a picture of the guy who slammed a beer glass onto another's head, the pair catch up on news before resuming their meticulous interviews of a bar-load of witnesses.

A man is released from Kumla prison on a fine summer morning and walks towards a waiting van. He checks his wallet and a small device that looks like a calculator. Glancing between the prison and the van, he presses a button on the device and smiles as he climbs into the van which speeds away before the sound of the explosion can reach it. Ex-A-Unit colleagues Arto Södersteft and Viggo Norlander, currently on loan to Kumla's regional CID, are called in to investigate the prison blast. The explosion has spread most of Lordon Vukotic's body around the walls of his cell. He had been a member of drug dealer Rajko Nedic's circle but lately Vukotic had become a model prisoner, training to be a business lawyer, perhaps Rajko's business lawyer. Norlander, a new father with baby-sick on his shoulder, is half asleep. It surprises the waiting investigating team to see him suddenly take efficient and energetic command. But Norlander is determined to get the case cracked. It's almost Midsummer's Eve and he means to celebrate it with his new daughter.

Just one or two old colleagues to reunite. The giant, one-time “Mr Sweden”, Gunnar Nyberg, is now part of the National CID's “Paedophile Hunters” team. He spends his days in front of a computer screen watching some of the most dreadful things he has ever seen – but just now he is bumping into ex-colleague Paul Hjelm at a café near headquarters.
With an explosion and gun fight on an industrial estate claiming the lives of several drug dealers and far-right extremists, Jorge Chavez, another ex-A-Unit man enters the picture. Investigative threads from all of these cases start to intersect. It seems as though the original A-Unit is about to be reassembled…

Arne Dahl's TO THE TOP OF THE MOUNTAIN presents a sprawling spider of crime. Murder, drugs, neo-Nazi terrorism and paedophile rings intersect to reunite the old Intercrime Unit. Even boss Hultin is dragged out of retirement to head the team again. The exciting, involving plot builds suspense to the end: an examination of love and hate through crime fiction, all facets, both ends of the scale – lovers and ex-lovers, family and children, colleagues and teams, nationalism, racism and a lot of things in between. I enjoyed the previous book BAD BLOOD. This one has a different translator in Alice Menzies and there seems to be a slightly more disjointed feel to the narrative – but this may be true to Dahl’s writing. Although TO THE TOP OF THE MOUNTAIN became part of Series One of the Swedish Arne Dahl television series, don't be deterred from reading the book if you watched the series. Dahl's writing is a wry, richly charactered experience and well worth exploring in its own right.