The next entry in the Euro Crime reviewer's Favourite Discoveries of 2015 is a TV series/DVD, recommended by Lynn Harvey. 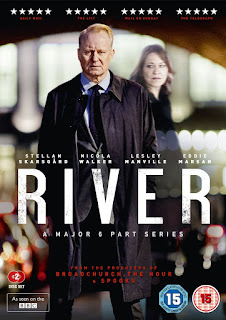 My favourite discovery of 2015 was Brit-crime television serial “RIVER”.

I confess that I don't watch many Brit-crime series on the telly so let me make my apologies now to die-hard fans of the genre. However this six-parter (BBC One and Netflix) which was created and written by Abi Morgan (The Hour, Suffragette) was a breath of strange fresh air that hooked me from the start.

Swedish actor Stellan Skarsgard plays John River, a London police detective who carries on convincing conversations with voices in his head and sees dead people. Shocked by losing his long-term police partner (Nicola Walker), River bemuses his new partner (Adeel Akhtar) as they strike out in pursuit of a killer. The search takes River through the streets of contemporary London, rattling many shocked passers-by in the process, and what develops is a layered twister of a crime plot. Skarsgard is both powerful and subtle. In fact the entire cast is seriously good, including Eddie Marsan as the malevolent Thomas Cream, a Victorian serial killer who stalks through River's brain whenever he is at his most vulnerable.

“RIVER” is a great ensemble piece whose plot, photography, compassion and performances make up a persuasive and moving whole. True, I lost my partner's viewing-company after a couple of episodes but flashback scenes and "hallucinations" are a stretch too far for his plot-following capabilities – and he was plainly puzzled by the concept of a Swede being a detective in the British police. However, as you can see, none of this was a problem for me. I ate it all up. I loved it all: performances, plot, writing – and I was not alone amongst my acquaintances in being moved by the events uncovered and the ending.

Can or will such an ensemble piece come back for a second series? Much as I loved it, I have my doubts. So I recommend that you catch “RIVER” in any way you can. Well I would, wouldn't I.
Posted by Karen (Euro Crime) at 9:00 am

I'm with you! I loved this show. It was completely unique, very moving, and I especially loved Nicola Walker's performance- esp. when she was singing and dancing. A marvel of a show.