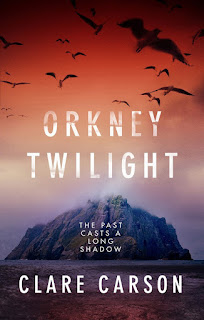 This lovely book is Carson’s first novel and is exquisitely written. It is a poignant tale of the relationship between a father and daughter and focuses on a holiday they take together in Orkney; a place that had been a firm favourite many years ago. Carson herself spent many childhood holidays with her own father in Orkney and her memories are vivid in the telling of this tale.

Jim is an undercover policeman and Sam, his daughter, is convinced that he is up to something. After his disgraceful performance at her birthday party, where he showed up late and drunk then proceeded to embarrass her in front of her friends, she is determined to find out just what this ‘something’ is. When he starts to talk about retiring from the police and finishing his degree Sam’s suspicions grow and she goes to Orkney with him to see if she can catch him and work out what is going on. As she trails around Orkney, remembering things from her past and her relationship with her dad, Sam discovers that the truth is a dangerous thing and is soon far more involved in Jim’s secrets than she had originally planned.

This book has clearly been penned by someone who is loaded with talent and is a name to watch out for. Based on Carson’s own childhood, the descriptions of midsummer Orkney are beautiful and bring the story to life in a very personal way. The relationship between Jim and Sam is very sad – put under strain by his career and need for secrecy and made very evident by the way she not once calls Jim “Dad”. All the way through it is not possible to guess at what the end of this book with be. When it comes it leaves you shocked and cold; making you reassess your relationships with your own family members and hoping that none of them harbour dark secrets that you know nothing about. I am definitely impressed by Clare Carson and will be following her progress with interest.