Here are two reviews by Terry (read more of Terry's reviews for Euro Crime here) of David Downing's most recent book, One Man's Flag, and an early book in his "Station" series, Silesian Station: 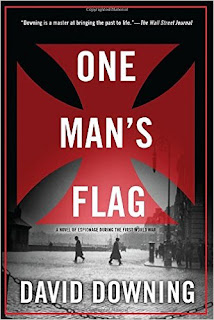 Jack McColl, a spy for His Majesty’s Secret Service, is stationed in India, charged with defending the Empire against Bengali terrorists and their German allies. Belgium, he finds, is not the only country seeking to expel an invader.

In England, meanwhile, suffragette journalist Caitlin Hanley begins the business of rebuilding her life after the execution of her brother—an IRA sympathizer whose terrorist plot was foiled by Caitlin’s own ex-lover, the very same Jack McColl. The war is changing everything and giving fresh impulse to those causes—feminism, socialism and Irish independence—which she as a journalist has long supported.

The threat of a Rising in Dublin alarms McColl’s bosses as much as it dazzles Caitlin. If another Irish plot brings them back together, will it be as enemies or lovers?

I read, for review, the previous novel JACK OF SPIES which introduced Jack McColl to readers as a salesman of high end motor cars and also in the employ of a forerunner to MI6. This new book continues the adventures of the previous one but further along in time so that the First World War has definitely begun and for instance McColl's brother Jeb, is presently fighting from a trench in France. The book maybe read as one-off story, as the author gives full historical explanations but I found it very helpful to understanding and appreciating this current book, to have read the previous one.

The narrative of the story is seen through the eyes of Jack and alternatively Caitlin, which works very well. The author has done extensive period and geographical research and the very evocative atmosphere of 1914 India, Belgium, England and Ireland is reproduced very well for this reason.

I very much enjoyed reading his earlier Second World War books, which all had "Station..." in the title and now I'm equally enjoying the author's present books series about the earlier War and I hope that he writes many more. 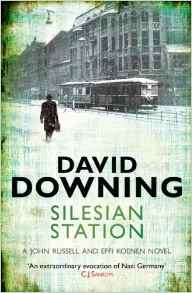 This unbelievably good book comes hot on the heels of his ZOO STATION, featuring John Russell a British journalist living in Nazi Germany. After just reading a few pages you can imagine the jack boots on the cobblestones and feel the oppressive regulation of life lived under a dictatorship.

In early Summer, 1939, John Russell has returned from a long holiday in the USA accompanied by his son Paul who is aged twelve. Whilst in the States he manages to secure US citizenship and an American passport which makes it unlikely that he would be arrested back home in Berlin if, as he believes, Britain goes to war with Nazi Germany but that the US remains neutral. However, to obtain the American passport he had to promise to send intelligence reports to American Intelligence and he also has a new job working for the San Francisco Tribune newspaper as their Central and East European correspondent.

The Gestapo are very impressed by John Russell's ability to act as a double agent for them against the USSR. John has to accept their orders to provide fake intelligence to a Soviet Embassy. The Gestapo imprisoned John's German girlfriend for a few days in very harsh conditions to persuade him to co-operate with them. He also advises the USSR that the Nazi intelligence he is supplying them is dud but urges them to set up an urgent escape route for him and his girlfriend if they should need to leave Berlin in a rush.

Miriam is a German Silesian Jewish farm girl aged seventeen who has been irritated a lot by local young Nazi thugs and her parents are fearful for her safety and believe she would be better off in a large metropolis such as Berlin as they have a cousin there who will look after her and get her a job. So she travels to Berlin by train, a journey of eight hours or so. In the meantime the man who was supposed to meet her at the Berlin Train Terminal is killed and so a complete stranger asks her if he can help her but she subsequently disappears.

Her parents telephone a few days later but cannot get any information about her from other friends and relations in Berlin and eventually John Russell is asked to help by a mutual friend. John has in the past used an elderly private detective to do research for him on various projects and he uses him to search for the Jewish girl. Unfortunately, the German Police do not want her found? Why? The reasons and answers form the basis of a very exciting story which is mixed with a day to day history of what life was like living in "the cage" for a British Journalist living in Nazi Germany.

David Downing shows his hero, Russell, is a decent practical man working as a journalist, with a reasonable relationship with his son, girlfriend and ex-wife. There is some humour as well which relieves the tension and perhaps indicates that the Germans were not dissimilar to the British in many aspects of daily life.

I enjoyed SILESIAN STATION immensely and look forward to reading the next book in the series, STETTIN STATION.

Read another review of SILESIAN STATION.