As per usual I have asked my fellow Euro Crime reviewers to come up with their favourite crime fiction discovery of the past year - be it book, film or tv series. 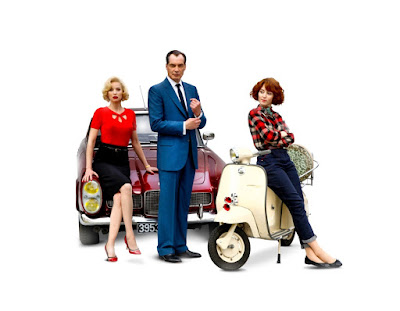 My favourite discovery of 2015 was the DVDs of the French television series Les Petits Meurtres D'Agatha Christie (Agatha Christie's Little Murders) – I started out with the Region 1 box set put out by Acorn and got hooked in by the second series featuring Commissaire Laurence Swan (played by Samuel Labarthe), Alice Avril – a journalist (Blandine Bellavoir) and Swan's secretary Marlène (Élodie Frenck) who investigate crimes in the Nord-Pas-De-Calais in the 1950s.

The films (just over 90 minutes each) are a twist on Agatha Christie with basic plots intact but are very loose adaptations with a little more in the way of humour, gore and emotional relationship that one is used to with the British adaptations. They also travel a lot more over the canon – the 2015 films were Mademoiselle MacGinty Est Morte (Mrs McGinty's Dead), Un meurtre est-il facile? (Murder is Easy), Murder Party (A Murder is Announced) and Pension Vanilos (Hickory Dickory Dock) .

The addiction is such now that I am buying the DVDs from France when they are released and have the 2015 releases lined up for over Christmas to practice my rusty French on (there are no English language subtitles for the latest ones and indeed most of them – only 7 to date are available with English language subtitles of the 22 in the series and the 4 part ‘pilot’ Petits meurtres en famille (based on Hercule Poirot's Christmas)).

Why do I like them so much – because they are fun; they play with the conventions of Agatha Christie, have good characterisation and have characters that do develop as the series goes on (especially Marlène).

I have the first seven and really enjoyed them. I thought the ABC Murders and Cat among the Pigeons were the best, but all were good. I wish the others would be released here.