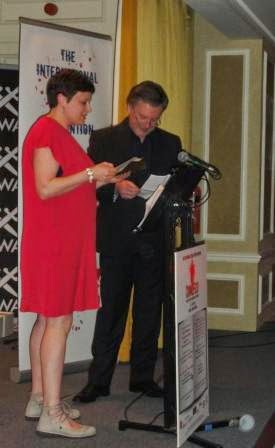 And the winner is Leif GW Persson for Linda, as in the Linda Murder translated by Neil Smith (who also translated last year's winner, Last Will by Liza Marklund).

As well as this beautiful trophy, Leif Persson will also receive a cheque for £200 and should he wish to take it up, a pass and panel at next year's CrimeFest.

Leif Persson was not able to collect the award in person but sent in the following acceptance speech (read out by Barry Forshaw):

My character Superintendent Evert Bäckström is actually not a nice person. He embodies pretty much every human prejudice - and then some - and he does so proudly and wholeheartedly. He feels that he is not only God’s gift to humanity but also the object of every woman’s secret fantasies. I myself, am a fully normal person - but there is a joy that he brings me when I tell the story of his life and times.

Now he and I have received an award. A very fine English award, which makes me especially happy as a large part of my family lives in England. There is one person with whom I most profoundly want to share this honour and that is my excellent translator Neil Smith who has succeeded in making this Swede, with his spiritual and physical roots in the Stone Age, at least intelligible for an educated Anglo-Saxon public. Thank you!
Posted by Karen (Euro Crime) at 5:07 pm