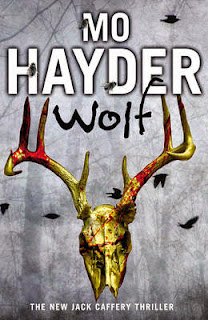 A dreadful murder happened fourteen years ago that has left its mark on the Anchor-Ferrers family. Hugo Frink, just seventeen-years-old, had been out late with his girlfriend Sophia in the local woods, when they were attacked and killed in a horrific way. Lucia, the daughter of Oliver and Matilda Anchor-Ferrers, and just fifteen at the time, had been dating Hugo until they had split up just a week before he was murdered, and the family has never really quite recovered from the shock of it all. The murderer, Minnet Kable, was captured and locked up. But when Oliver, Matilda and Lucia, and their dog Bear, arrive at their out-of-the way country house, somewhere in the Somerset Mendips, they discover something strung up in the trees in their garden that brings back the murder of Hugo to the fore.

Has Minnet been released? Is he now exacting some sort of psychopathic revenge? Oliver, who has just had an operation on his heart, and his wife are worried, but they can’t ring the police to ask them to investigate as the landline isn’t working. Knowing that they can’t get a mobile signal unless they go to the bottom of the drive, they decide to barricade themselves in the house.

Soon afterwards two police officers turn up, ostensibly to ask about the murder of a woman in a nearby cottage, and to ask the family if they’ve seen anything. The family take the opportunity to show the two policemen what they’ve found. However, the policemen are imposters. Once they’ve earned the trust of the family, they tie them up, and rob them. But that’s only the beginning of the nightmare.

Meanwhile Detective Inspector Jack Caffery is still concerned with the disappearance of his slightly older brother Ewan, when he was eight, and his brother just nine-years-old. He has just heard that someone connected to the case, Tracey Lamb, has recently died in Holloway prison. She was his last hope in solving the case and finding Ewan. But, she has left a will, and it seems to reveal a final clue. To find out more, he needs to talk to a current prisoner, but to do that he has to make a deal with the character called the ‘Walking man’. However, the Walking man will only help if Jack finds the true owners of a lost dog called Bear, that the Walking man is looking after. Those of you who have read the Hayder books before will recognize the Walking man as someone who lost someone precious to him, and has taken to walking the countryside in the hope of one day finding out what happened. Here, the Walking man’s instinct that someone else is in trouble, prompts him to engage Jack’s help in exchange for helping Jack discover what happened to Ewan.

The story of the Anchor-Ferrers gradually builds up alongside Jack’s search for clues about his brother, and the links between the two story lines gradually become clear. Jack works on his own, almost going ‘absent without leave’ from the police force, to solve both mysteries. No-one has reported the Anchor-Ferrers as missing or in trouble, and as the situation deteriorates, the urgency for someone to discover them rises, nicely driving the plot forward. A kind of reckoning of sorts for Jack, and, through their own story, for the Anchor-Ferrers as well, with shocking and disturbing denouements for both. Mo Hayder’s books featuring Jack Caffery are always an entertaining and engaging read, and this one doesn’t disappoint.

Hi have just read Gone& now into Poppet. Wolf is on order at my local libary.I have missed you recent emails & never had a reply from Mo re The Australian version of our Walking Man who has been walking the continant for 15 years . Regards Don Paterson a