TV News: Quirke on BBC One 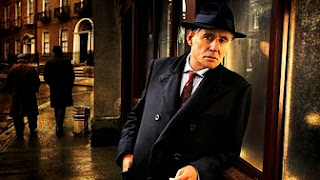 Benjamin Black's Quirke series has been made into a tv series starring Gabriel Byrne. The first of the three 90-minute episodes, is based on Christine Falls and is on Sunday 25 May at 9pm on BBC One. The cast also includes Michael Gambon:


Dublin, in the late autumn of 1956. City pathologist Quirke - we never get to know his Christian name - stumbles late one night from a party in the nurses' quarters with a view to sleeping off his hangover in his subterranean pathology lab. To his surprise his quiet refuge has been invaded by his adoptive brother, obstetric consultant Malachy Griffin, who is at Quirke's desk completing some paperwork for a recently deceased patient named Christine Falls.

When Quirke returns next morning to find Christine's body gone, he remembers his brother's odd behaviour, and, consumed by curiosity over what Mal was doing, recalls the body and performs a full post mortem.

As he investigates, all the time stirring up a hornets' nest of trouble for himself, Quirke uncovers the truth about a family secret that has remained buried for nearly twenty years, and begins to understand that there are some truths that may be better left untold.

Quirke has been shown in Ireland in February, on RTÉ One and will be available on DVD from 9 June 2014.

Without spoiling anything, I have to warn fans of the Benjamin Black books that opinion was quite sharply divided when the TV adaptation first went out on Irish TV.

A great cast (Byrne, Gambon Stanley Townsend, Geraldine Somerville), lots of period detail and highly atmospheric, yet I thought the script clumsy and the pacing sluggish. And I'm a huge fan of Banville & Black...

Oh, this sounds like a good one. I haven't read the books so will be seeing it 'as is'. Looking forward to it as I like Gabriel Byrne so thanks for the heads up.

June 9. I shall mark my calendar for the DVD's. Hopefully, we'll get them in the U.S.