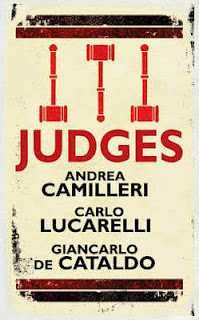 JUDGES is a collection of three short stories from three of Italy's top crime writers. The collection was first published in Italian in 2011 and in all three stories, the judge is fighting against a corrupt establishment.

The first story is Andrea Camilleri's Judge Surra, which has been shortlisted for this year's CWA Short Story Dagger, and like his Montalbano series, is set in Sicily but around a hundred years earlier. This is an amusing tale of how the judge unwittingly brings down a mafia boss whilst discovering the local delicacy of cannoli pastries.

The second story is Carlo Lucarelli's The Bambina, set in Bologna in 1980 at a time when judges needed protection from the police. The judge in this case is a young woman, nick-named Bambina who is assigned an older policeman. She's prosecuting a fraud case and doesn't think she requires a bodyguard however she is soon proved wrong and she finds a different way of meting out justice.

The final story is Giancarlo De Cataldo's The Triple Dream of the Prosecutor, set in modern day and the main protagonist, Mandati, is a public prosecutor in a small town who is trying to bring down the mayor, a rival from childhood, and who has his fingers in all the financial pies. The mayor usually thwarts Mandati but will he this time?

Each story covers a similar theme but are all very different in approach and time-frame and the high standard does make you wish that more of Lucarelli's and De Cataldo's books were available in English. All three authors have recently had tv series shown in the UK: Montalbano, Inspector De Luca and Romanzo Criminale, so one can hope.

More short stories from these three authors can be read in the excellent anthology, CRIMINI.

The stories were translated respectively by Joseph Farrell, Alan Thawley and Eileen Horne.
Posted by Karen (Euro Crime) at 9:00 am