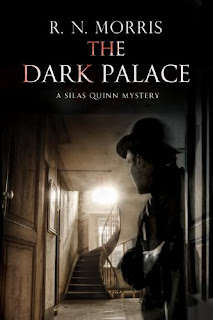 Detective Inspector Silas Quinn lives in a boarding house in 1914 London. He lusts after one of his fellow lodgers, a Miss Dillard, as well as having been rejected in love by his boss’s secretary Miss Latterley. Quinn is sarcastic and apparently renown for shooting his revolver and killing the bad guys! He is known as Quick fire Quinn much to his annoyance.

The day starts well when he discovers his immediate boss has been transferred and he is to take charge of the department. His boss Sir Edward Henry wants him to liaise with Lord Dunwich at the Admiralty. War with Germany is feared and they want him to identify any German spies. The only problem is there is no guidance on how to identify them.

One of his sergeants, Macadam, is interested in the department purchasing a camera for surveillance. The other sergeant Inchball is sceptical of the camera’s usefulness, but has his eye on a barber shop run by a German, Fritz Dortmunder. Quinn is invited to a premier of the famous Austrian film director and exponent of Kinematograph, Konrad Waechter's latest masterpiece entitled 'The Eyes of the Beholder'. Besides Waechter he meets one of the backers the German Oskar Hartman (who has a connection to Lord Dunwich), Porrick who owns the Picture Palace, the beautiful actress Eloise and Paul Berenger the main actor. Also in attendance is Harry Lennox newspaper proprietor as well as the director's assistant Diaz and his cousin Inti.

When a woman is attacked and apparently loses an eye near the premier of the picture, Quinn tries to resolve what is going on. Who is the stern faced man who follows Quinn on the Tube and turns up berating the film crew, who apparently knows something about the death of Quinn's father? When an actress/prostitute turns up murdered and has had one of her eyes removed and Lord Dunwich is sent a white billiard ball with an eye painted on it and another party is sent a playing card with its eye scored out, Quinn has his work cut out.

I've only read one other book by the author, one of his Porfiry Petrovich series, this is a much different book. I found Quinn very eccentric but entertaining. Recommended and I will read more of the Quinn novels.