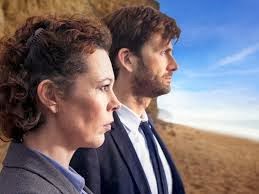 Acclaimed ITV series Broadchurch is to become a book, co-written by the series creator Chris Chibnall and Erin Kelly. From The Independent:


The novel will elaborate on the existing plot and delve deeper into the lives and backstories of the characters. It will also include “previously unseen material”, according to publishers Little, Brown.

The acclaimed drama, written by Law & Order and Doctor Who writer Chibnall, followed a grief-stricken family coming to terms with the mysterious death of their son Tom Latimer.

Chibnall said: “The day after Broadchurch finished, a woman stopped me on West Bay beach and asked me ‘When’s the book coming out?’. Now I have an answer! Even better, we have one of Britain’s best psychological thriller authors at the helm.”

Kelly, whose novels include The Burning Air and The Poison Tree, said she was “thrilled” to be writing the novel alongside Chibnall.

“Like everyone else I know, I was gripped and moved by Broadchurch. I’m utterly thrilled to be writing the novel, not least because it gave me an excuse to watch the whole series again, multiple times,” she said.

“It’s testament to the writing, the performances and the photography that I was spellbound even when I knew the outcome. I can’t wait to delve even deeper into the hearts and thoughts of the characters and to bring the town to life on the page.”


A second series has been commissioned but there are no details at the moment with TV Dagger Awards winners David Tennant and Olivia Colman unconfirmed for the sequel. Meanwhile David Tennant is reprising his role for the US remake.
Posted by Karen (Euro Crime) at 6:42 pm