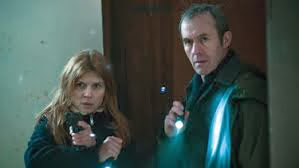 As well as Talking to the Dead, Sky is also showing next week, the first episode of The Tunnel based on the Swedish/Danish The Bridge and not surprisingly features a body in the Channel Tunnel.

Set primarily in Folkestone and Calais where detectives Karl Roebuck and Elise Wassermann are called to investigate the death of a French politician. When a shocking discovery is made at the crime scene, the pair is forced into an uneasy partnership as they seek out a politically-motivated serial killer who draws them into his own personal agenda.


The Tunnel begins on Wednesday at 9pm on Sky Atlantic.

(I still haven't watched The Bridge though I really want to. Should I watch The Tunnel first or stick it on the HD as well and watch it after The Bridge, or not bother at all? )
Posted by Karen (Euro Crime) at 9:00 am

You should watch The Bridge first - it is brilliant!

In my own opinion I would delay in watching 'The Tunnel' until you have watched the superb 'The Bridge'. Obviously I haven't seen 'The Tunnel' and look forward to doing so but I have a feeling it will not fully capture the full experience of the original that must be experienced without prior knowledge, I think.