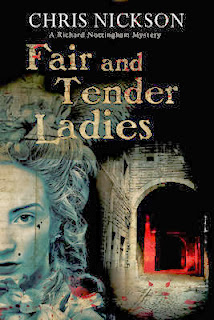 This is the sixth book in a series of historical crime fiction, set in Leeds in the early 1700s. Public order is maintained by the Constable of Leeds, Richard Nottingham, along with his deputy John Sedgwich, and various other of his ‘men’ including Rob Lister, son of the owner of the Leeds Mercury, and who is courting Richard’s sole surviving daughter, Emily.

The story starts with a brother, Jem Carter, looking for his missing sister Jenny, who had come to Leeds to seek her fortune. Of course, it is highly likely that she’s ended up in one of the many brothels, but no-one seems to have seen her, not even the new owners of the late Amos Worthy’s old establishment, Mrs Wade, and her son and two daughters (the ‘fair and tender ladies’ of the title perhaps?). Then, shortly afterwards, Jem’s badly beaten dead body is found. Had he been asking questions in the wrong places? And then a face from the past turns up in Leeds, Tom Finer. A scoundrel that Nottingham thought he was rid of, when he went off to London. What is he doing in Leeds again? What underhand deeds is he planning? Finer claims he is a changed man, but Nottingham doesn’t believe him. And in another strand of the book, we learn about Emily and her charity school for young daughters of the poor. She inherited some money from Amos when he died, which she has used to set up the school. But then the school is attacked, and Nottingham is affected badly. He is worried that someone is targeting another member of his family, and yet again he will lose someone precious to him.

As with the previous books, slowly but surely, Nottingham starts to uncover what is behind the various events, from Jem’s murder, to Jenny’s disappearance, to Tom Finer’s motives and the person or persons behind the attacks on Emily’s school. Mostly through hard slog, and a relentless need to talk to anyone and everyone to find out what people have heard and seen, even the people on the fringes of society. Nothing is too easy, and there is plenty to sadden Nottingham's heart during his attempts to get to the truth. With plenty of side stories, and descriptions of 1730s Leeds to entertain, this book is as good a read as the previous books in the series, and let’s hope its not the last.